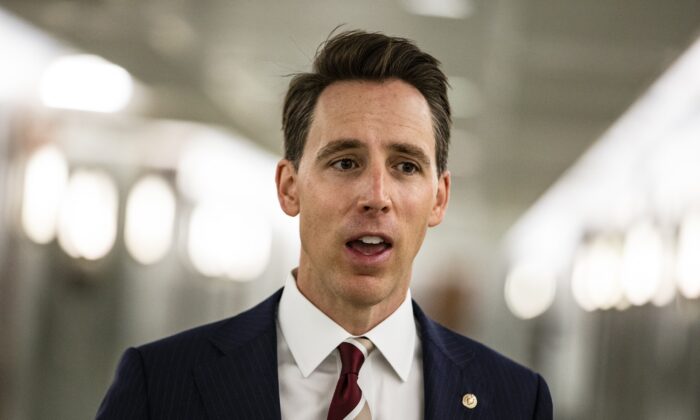 The U.S. Senate has unanimously passed a bill that seeks to require President Joe Biden’s administration declassify all intelligence relating to the origin of COVID-19, including information about what happened at the Wuhan laboratory at the start of the pandemic.

Republican Sens. Josh Hawley (Miss.) and Mike Braun (Ind.) submitted their proposal, known as the COVID-19 Origin Act of 2021, to require that the Director of National Intelligence (DNI) declassify to Americans U.S. intelligence on the alleged links between China’s Wuhan Institute of Virology (WIV) and the origins of the CCP virus last month. The bill was passed by unanimous consent.

Hawley told the Senate floor on Wednesday that the bill gives an opportunity to the American public to evaluate the evidence for themselves, adding that this is only the first step.

“They deserve it. Their government owes it to them, and it’s time to act,” Hawley said. “And the American people deserve something else. They deserve to have this government hold accountable that nation which started this virus, whose lies about this virus turned it into a global pandemic, whose lies about this virus prevented our country and many others from being able to address it effectively in time—of course I’m talking about China.”

The DNI will then be required to present a report to Congress containing the declassified information within 90 days of the bill’s potential enactment.

The DNI’s press office did not immediately respond to The Epoch Times’ request for comment.

Americans have been through so much from this virus.

President Biden must declassify all U.S. intel related to the Wuhan lab and COVID-19 pandemic, so the American people and independent researchers can get answers.

I’m proud the Senate passed @HawleyMO‘s and my bill to do it. pic.twitter.com/UyztaV5lL8

Sen. Braun added, “President Biden must declassify all U.S. intel related to the Wuhan lab and COVID-19 pandemic, so the American people and independent researchers can get answers.”

This comes as calls for a new probe into the CCP (Chinese Communist Party) virus ramps up amid widespread concerns that the pandemic may have stemmed from a laboratory accident.

Earlier this week, Health and Human Services Secretary Xavier Becerra, in remarks to the virtual 74th World Health Assembly, called for the WHO to launch a “transparent” second phase to the investigation.

“Phase 2 of the COVID origins study must be launched with terms of reference that are transparent, science-based, and give international experts the independence to fully assess the source of the virus and the early days of the outbreak,” he said.

The comments come after The Wall Street Journal reported on May 23 that three researchers at the Wuhan Institute of Virology were hospitalized in November 2019 with symptoms consistent with seasonal flu and COVID-19, the disease caused by the CCP (Chinese Communist Party) virus. The newspaper cited unnamed U.S. government sources familiar with a previously undisclosed U.S. intelligence report.

Janita Kan and Mimi Nguyen-Ly contributed to this report.

Update: This article has been updated to include more details about the bill.