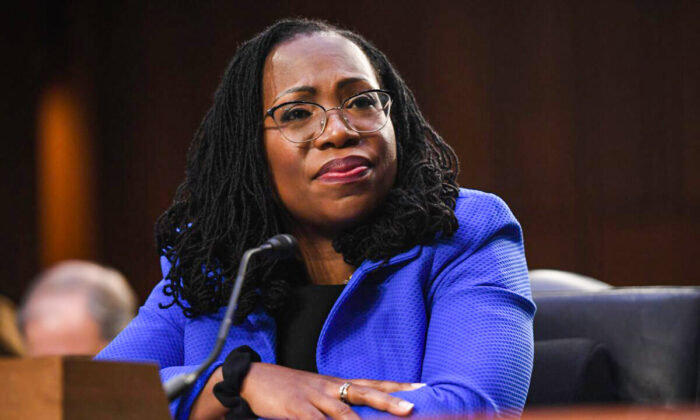 The Senate cleared the way for a final floor vote to confirm Supreme Court nominee Judge Ketanji Brown Jackson with a procedural vote late on April 4 after weeks of tough scrutiny and a deadlocked committee vote along party lines earlier in the day.

If confirmed, Jackson will be the first black woman to serve on the high court.

The 53–47 procedural vote included support from all 50 Democrats and Republican Sens. Susan Collins of Maine, Lisa Murkowski of Alaska, and Mitt Romney of Utah. Earlier on April 4, the Senate Judiciary Committee deadlocked on a party-line vote of 11 to 11, forcing the extra procedural step.

The committee vote came later than expected for Democrats after Sen. Alex Padilla (D-Calif.) was held up by a delayed flight, forcing the vote to later in the day to guarantee its success in the equally divided Judiciary Committee.

Jackson, who was nominated by President Joe Biden to succeed Supreme Court Justice Stephen Breyer, who is retiring, has been accused of a “soft-on-crime” attitude by Republicans who have cited her lenient sentencing decisions for those in possession of child pornography, as well as her apparent lack of a unified judicial philosophy.

On April 4, those conflicts were reopened as Republicans made a final attempt to derail Jackson’s nomination.

“It was unfortunate that some moments in the hearings came to that,” Durbin said on April 4.

“This action today is nothing less than making history. I’m proud to be a part of it.”

In his opening statement, ranking Republican member Sen. Chuck Grassley (R-Iowa) accused Democrats of hypocrisy over the issue of a nominee’s judicial philosophy.

During the week of hearings, Republicans pushed Jackson to elaborate on her judicial philosophy, but her answers—which described a “methodology” that would work on a case-by-case basis—left Republicans dissatisfied and confused some Democrats.

Democrats responded to the attacks by saying that judicial philosophy doesn’t matter.

During his statement on April 4, Grassley cited past statements by Senate Majority Leader Chuck Schumer (D-N.Y.) in which he argued for more rather than less emphasis on judicial philosophy, which Grassley called “hypocritical.”

Arguing for the importance of judicial philosophy, Grassley said it’s necessary for a Supreme Court justice to have “an understanding of the fundamental principles of our constitution.”

Jackson “does not have a position on whether individuals possess natural rights,” Grassley noted in reference to one exchange from her hearings.

At another point in the hearing, Senate president pro tempore Patrick Leahy (D-Vt.) also praised Jackson and decried GOP criticisms of the nominee.

Jackson “put on a master class in what it means to be an independent, fair-minded judge,” Leahy said, despite “disrespectful behavior” from Judiciary Republicans.

Leahy called for Republicans and Democrats to end “tired tribalism” and unite behind Jackson, who Leahy called one of “the most well-qualified nominees” that he had ever considered in his decades in the Judiciary committee.

Sen. Lindsey Graham (R-S.C.) responded to Leahy by citing the treatment of the past three GOP nominees to the high court—Justices Neil Gorsuch, Brett Kavanaugh, and Amy Coney Barrett—who advanced through the then-GOP-led committee on a party-line basis, and noted that in such an environment, it would be “more odd” if a single Republican member supported Jackson’s confirmation.

Graham also added that Jackson, in her role as a judge and on the U.S. Sentencing Commission, “had a chance to deter the crime [of child pornography]” by imposing tougher sentences “and she chose not to.”

During another part of the hearing, Sen. Marsha Blackburn (R-Tenn.) recounted a controversial exchange between herself and Jackson. In the exchange, Blackburn asked Jackson to define the word “woman” but she refused, saying she was “not a biologist.”

This exchange, Blackburn ruled, “speaks volumes” and “shows that [Jackson] is beholden to the radical left.”

On March 28, Republicans in the Senate Judiciary Committee placed a one-week hold on the confirmation vote in the committee, citing gaps in Jackson’s record and incomplete records from the White House.

“Democrats have taken to repeatedly mentioning that Judge Jackson has been confirmed by the Senate three times—two of which were non-controversial—using votes for positions like the U.S. Sentencing Commission,” Grassley said on March 28, when requesting the hold.

He warned against the Democrats’ efforts to compare the two, saying it “is going to make it much harder to confirm anyone to those positions. It encourages senators to apply the same standard used for evaluating Supreme Court nominations to every single position.”

“That’s because information has been withheld,” he said, citing a laundry list of nonpublic documents from Jackson’s time in the U.S. Sentencing Commission, 48,000 pages of documents held back by the Obama White House, and many others.

“It appears the White House wants to hide [Jackson’s] record.

“So with so much information withheld, we’ve examined her record and there were a lot of questions about Judge Jackson’s judicial philosophy.”