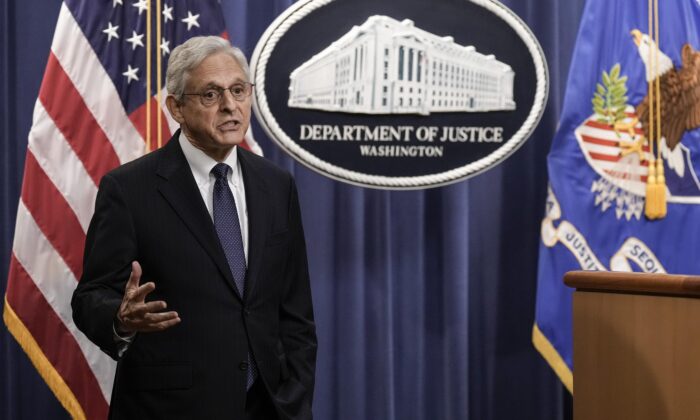 Attorney General Merrick Garland has received a flurry of stern letters, including notice of an investigation, from Republican members of Congress in the days since the FBI’s Sept. 23 raid on the Pennsylvania home of pro-life activist Mark Houck.

“Not only did your office turn a local dispute into a national case, but the FBI reportedly executed the search warrant in as extreme a manner as one can imagine,” a Sept. 26 letter, sent individually by Sen. Josh Hawley said. “The FBI admitted in a statement that as many as 20 agents were present with their guns drawn.”

Houck was handcuffed in front of his wife and seven children during the 7 a.m. arrest and search of his home.

A Sept. 27 letter from 22 Republican House and Senate members asked why the FBI was deployed for state-level assault charges were dismissed by local authorities in Philadelphia.

“At the moment, it appears to be an extraordinary overreach for political ends,” the joint letter said. “We request an explanation for the excessive level of force used by the FBI in this case, and why the power of federal law enforcement was once again used against an American citizen in what should be a state and local matter.”

Next, a Sept. 28, a letter to Garland and FBI Director Christopher Wray from 12 Republican senators, offers more insight into the incident and askes Garland to provide answers to five specific questions by Oct. 12, so Congress can perform an independent review of the matter.

According to the letter, the incident involved an abortion clinic worker who allegedly shouted obscenities at Houck’s then-11-year-old son and invaded his personal space, refusing to leave him alone. Houck allegedly pushed the individual away from his son.

Houck’s attorney for that incident, John Williamson, told the committee the Philadelphia Police declined to arrest or prosecute Houck. Despite that, the clinic worker filed a criminal complaint against Houck which was dismissed after the clinic worker failed to appear in court at least twice.

During that case, the district attorney suggested settling the matter as a civil case instead of a criminal one, but the abortion clinic worker disagreed, the Senate letter said.

After the complaint against Houck was dismissed on April 22, 2022, he received an April 27, 2022 letter from the Justice Department, advising that he was under investigation for potential violations of the FACE Act. The Freedom of Access to Clinic Entrances Act prohibits threatening or obstructing people entering or exiting an abortion clinic.

Houck was likely familiar with the act as he regularly volunteered as a sidewalk counselor.

After receiving a letter from the DOJ, Houck hired attorney Matt Heffron, a former federal prosecutor. Heffron told the committee that he left two voicemails and sent an email to Assistant U.S. Attorney Anita Eve but did not hear back.

In the communications, Heffron told the DOJ that if it intended to indict Houck, he would receive the summons on Houck’s behalf and that he would appear voluntarily.

“Given their cooperation with federal law enforcement, the family did not expect to be awakened at 7 a.m. with reportedly over 20 FBI agents surrounding their home wearing armor plated tactical vests, ballistic helmets and holding ballistic shields and long guns,” the Senate letter said.

Once he was handcuffed, the letter says Houck asked his wife for his Catholic rosary and a sweatshirt. Then he was taken to jail.

The committee notes that on May 20, 2022, Garland sent a memo to Justice Department employees about its use of force policy. The memo, titled “De-escalation,” said officers must be trained in de-escalation tactics designed to gain voluntary compliance from a subject before using force, and such tactics should be used if feasible and if they would not increase the danger to the officer or others.

The actions taken by the FBI call into question whether they complied with DOJ’s use of force policy, the committee letter said.

“The FBI must explain their justification for their actions on September 23, 2022,” the letter said.

The letter signers ask the following questions about why Houck was not allowed to self-report for his arrest and arraignment after his attorney said he was willing to do so, and whether political considerations were made to approve and execute the warrant.

1. Why did the Justice Department wait 11 months after the October 2021 incident to indict Houck?

2. Please provide a list of Justice Department and FBI officials who approved the decision to open a grand jury investigation into Houck after the state criminal complaint had already been dismissed.

3. Please provide a list of Justice Department and FBI officials who approved the execution of the arrest warrant for Houck.

4. How many law enforcement personnel did the FBI use in executing the arrest warrant?

5. In light of Mr. Houck’s alleged cooperation with federal authorities, what factors led to the Justice Department and FBI executing an arrest warrant against him instead of using less aggressive tactics, including a summons to appear? Please explain how the execution of the search warrant complied with Attorney General Garland’s use of force memorandum.

The Epoch Times reached out to the DOJ for comment.