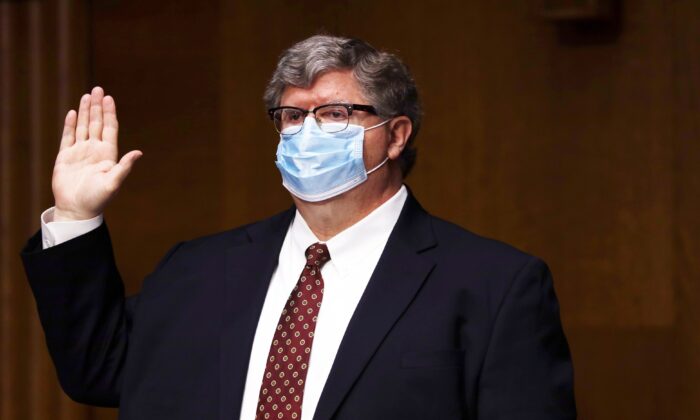 The Honorable Brian Miller is sworn in during a confirmation hearing before Senate Committee on Banking, Housing, and Urban Affairs at Dirksen Senate Office Building on Capitol Hill in Washington on May 5, 2020. (Alex Wong/Getty Images)
Trump Administration

WASHINGTON—The Senate has confirmed a new inspector general to oversee money distributed as part of the $2 trillion economic rescue law, putting at least one watchdog in place as oversight of the money has lagged.

The Senate confirmed Brian Miller, a lawyer in the White House counsel’s office, on a 51-40 vote June 2. Democrats voted against Miller after questioning his independence from President Donald Trump, who nominated him for the post.

Responding to those concerns, Miller told the Senate Banking Committee during his confirmation hearing last month that “independence is vital” for the special inspector general for pandemic recovery. He pledged to conduct audits and investigations “with fairness and impartiality.” The post would place him in charge of overseeing a roughly $500 billion Treasury fund for businesses and localities created as part of the economic rescue law approved in March.

Republicans pointed to his previous experience as an independent watchdog. Miller has worked at the Justice Department and was inspector general for nearly a decade at the General Services Administration, which oversees thousands of federal contracts. Miller helped force out the GSA’s director during President George W. Bush’s administration, drawing criticism from the White House and Republican lawmakers.

But most Democrats weren’t convinced, with only one—Alabama Sen. Doug Jones—voting for him. Another Democratic moderate, West Virginia Sen. Joe Manchin, said in a statement that he voted against Miller because “I believe his current role in the Office of White House Counsel and relationship with the president makes it impossible for him to remain independent as he investigates the administration’s response to the pandemic.”

As Miller assumes the post, he will be one of the sole checks on the massive pot of money as other oversight bodies set up in the law have foundered. The Pandemic Recovery Accountability Committee, a committee of inspectors general, still has no leader after Trump sidelined the original chairman, Glenn Fine, by demoting him. A bipartisan congressional commission is also rudderless as House Speaker Nancy Pelosi, (D-Calif.), and Senate Majority Leader Mitch McConnell (R-Ky.), have not yet agreed upon and appointed a chair, as the law directs them to do.

Trump has bristled at the law’s oversight provisions, suggesting in a signing statement that some of the mandates from Congress were unconstitutional and did not need to be obeyed. He has also often bristled at the work of inspector generals, firing several in recent months with little explanation.

Democrats questioned whether Miller would be able to remain neutral in that environment, especially amid concerns that some of the money has been going to larger, publicly traded companies in lieu of small businesses with the most need.

Ohio Sen. Sherrod Brown, the top Democrat on the banking panel, questioned at the hearing whether Miller would be able to hold the Trump administration accountable for how it administers the program and “guarantee that corporations getting taxpayer money put their workers first.″

If he is confirmed, Brown said, “I expect you to follow the letter and spirit of the law, and serve the American people—not President Trump. … You must be willing to stand up to the administration and any other bad actor and to uphold the goals of the law. Anything less is unacceptable.”