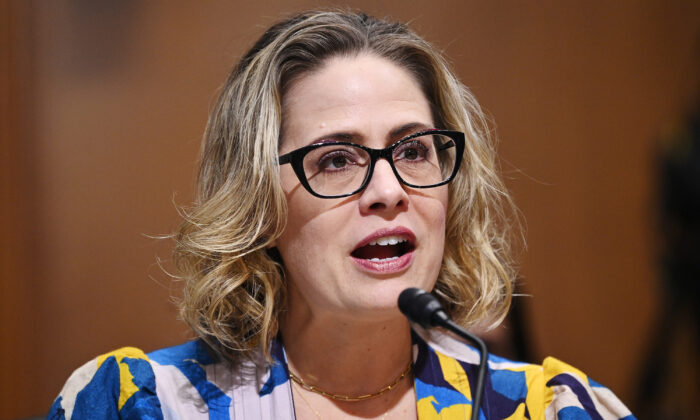 Rep. Ruben Gallego (D-Ariz.) on Jan. 23 announced a challenge to Sen. Kyrsten Sinema (I-Ariz.), who recently left the Democrat Party. In his campaign announcement he painted Sinema as an advocate for “the rich and powerful.”

“If you’re more likely to be meeting with the powerful than the powerless, you’re doing this job incorrectly,” he said.

“I’m trying to be the senator of Arizona [sic] because you deserve somebody fighting for you and fighting with you every day to make sure you have the same chance at el sueno Americano,” or the American dream, Gallego added later.

Sinema said on KTAR radio on Jan. 20 that she thought Arizonans wanted a break from “campaign politics” after the 2022 midterms.

“There’s a lot of really important work left on the table to get done for Arizona,” she said. “I’m incredibly proud of the work I’ve been able to accomplish in the United States Senate in the last couple years and I’m going to stay focused on the work.”

Gallego, 43, is a military veteran who entered the U.S. House of Representatives in 2015. He currently represents Arizona’s 3rd Congressional District, which covers portions of Phoenix.

Sinema, 46, became a congresswoman in 2013 before winning the election for an open U.S. Senate seat in 2018. Sinema beat Republican Martha McSally for the seat, which had been held by Sen. Jeff Flake (R-Ariz.). Flake chose to retire rather than run for another term. Sinema’s U.S. Senate win was the first for Democrats since 1988.

Sen. Mark Kelly (D-Ariz.) won the other seat representing Arizona in 2020, beating McSally, who had been appointed to the position after the death of Sen. John McCain (R-Ariz.).

Sinema announced in December 2022 that she was becoming an independent, blaming partisanship on both sides for her decision. Sinema was a major broker in the 116th Congress, which saw Democrats hold a majority in the 50-50 upper chamber only because Vice President Kamala Harris can cast tiebreaking votes. Sinema helped negotiate several major packages, including a $1.2 trillion infrastructure bill, earning praise from members on both sides of the aisle. Sinema also rejected several of the more radical Democrat proposals, drawing ire from some fellow Democrats.

Gallego has been one of the most vocal critics of the senator, including fresh criticism after she exited the party.

“Unfortunately, Senator Sinema is once again putting her own interests ahead of getting things done for Arizonans,” Gallego said in a recent statement. He claimed that Sinema was “back[ing] down in the face of a struggle.”

Gallego was born in the United States after his parents came from other countries, including his father from Mexico. Gallego has said his father left the family early in his life.

“Growing up poor, the only thing I really had was the American dream, an opportunity. It’s the one thing that we give every American, no matter where they are born in life. It was actually something to believe in and to fight for. The odds that a single immigrant mom with a Latino boy; statistically, I was never supposed to end up even in college,” Gallego said in his campaign video.

The congressman graduated from Harvard University with a degree in international relations before joining the Marines. He says the experience changed him.

“I had a government that believed in kids like me. I really did feel that I owed the country something. I got sent to Iraq. All my friends consistently being shot at, people trying to blow you up all the time,” Gallego said. “You never really fully come back from a war. You’re not the same person. Fighting through PTSD. There were some very low moments in my life. But I still didn’t give up hope and I pushed forward. I found a new way to keep serving.”

No Republicans have yet announced a bid for the seat, though several have been rumored to have interest, including former Arizona gubernatorial candidate Kari Lake.

Though Sinema is independent now, she still caucuses with the Democrats. Gallego or another Democrat winning the seat would boost the chances of Democrats retaining control of the Senate. Losing the seat to a Republican would diminish those odds.

Democrats have a 51-49 edge after flipping a Pennsylvania seat in the 2022 midterm elections. But the party faces a more difficult map in 2024, with more seats up for grabs and having to defend multiple seats in seats where former President Donald Trump won the most votes in 2016 and/or 2020. That includes seats in Montana, West Virginia, and Wisconsin.

““The Democrat civil war is on in Arizona. Chuck Schumer has a choice: stand with open borders radical Ruben Gallego or back his incumbent, Senator Kyrsten Sinema,” Philip Letsou,a  spokesman for the group, said in a statement.

The Democrat Senate campaign arm has not reacted to the announcement and did not return a request for comment.

Gallego has sponsored a bill that would let illegal immigrants serve in the U.S. military. He also introduced legislation that would remove the term “illegal alien” from federal law and signs, replacing it with “undocumented foreign nationals.”