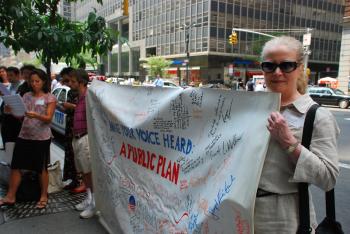 By Kristina Skorbach
Print
NEW YORK—Sen. Charles E. Schumer officially called for repeal of the law that allows Transocean, the world’s largest offshore drilling contractor, to escape with minimum financial responsibility for the Gulf of Mexico oil spill that has been deemed the worst environmental disaster in U.S. history.

Transocean relocated its headquarters from Texas to Zug, Switzerland, two years ago to avoid half of its tax liability in the United States. The Limitations of Liability Act of 1851 allows for a foreign-based company to escape a large portion of the damage costs.

The legislation, written almost 160 years ago, applies to “vessels” only. The Deepwater Horizon oil rig qualifies as a vessel under this act, making the act’s provisions “enormously harmful,” said Schumer.

Transocean has already been granted $401 million in insurance coverage for the incident and may get off with only paying $27 million to cover injured coastal areas and fish.

The senator noted that “Transocean owned the rig, BP leased the rig, and they’re each going to be playing a game of pointing the finger at one another.”

If BP and Transocean avoid paying for all of the cleanup, which BP estimates to cost $16 million per day, the funding will have to come out of the taxpayers' money. The taxpayers have already paid $87 million and may have to pay another $75 million, according to Schumer.

The senator expects the repeal of the law to be supported by many.

“I believe it will get broad and wide bipartisan support, and we will introduce it as soon as Congress resumes its session next Monday,” he said.

Schumer underlined that while BP and Transocean need pay for the spill, the federal government needs “to become more involved” in the cleanup efforts.