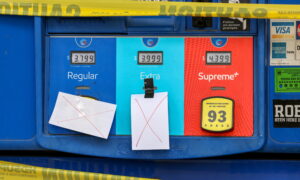 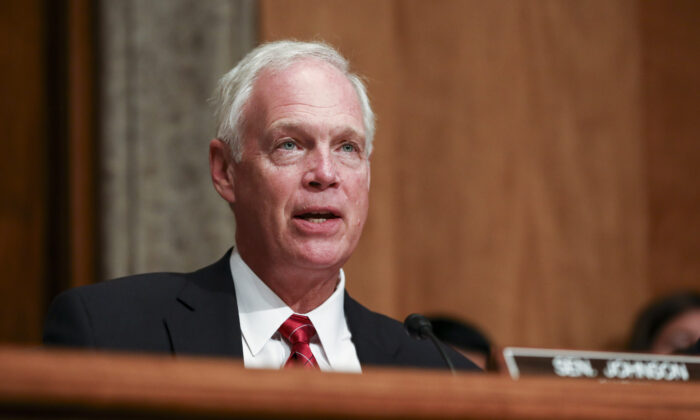 The senator called vulnerabilities “a devil of a problem” for which there’s no easy fix, while arguing that the Democrats’ Green New Deal would make the problem worse.

Colonial Pipeline, which delivers approximately 45 percent of the fuel consumed on the East Coast, halted operations last week after revealing it had been targeted by hackers. The shutdown affected gasoline supplies, with some people waiting for hours at gas stations—a situation made worse by panic buying.

Colonial Pipeline announced on May 15 that it has returned its systems to “normal operations.”

Johnson was asked by John Catsimatidis, host of the radio program “The Cat’s Roundtable” about the possibility of future attacks on the nation’s critical infrastructure systems in a May 16 interview.

“Cybersecurity is a devil of a problem,” Johnson replied. “There are no easy solutions.”

The Wisconsin Republican said part of the solution is holding cyberattackers accountable.

The United States should “make them pay for these types of intrusions,” Johnson said, though he acknowledged that identifying the hackers behind such attacks is difficult.

The FBI and administration officials have blamed a criminal syndicate named DarkSide for the Colonial Pipeline attack.

President Joe Biden said at a May 13 press briefing that while the administration does not believe the Russian government was involved in the intrusion, “we do have strong reason to believe that criminals who did the attack are living in Russia.”

“We have been in direct communication with Moscow about the imperative for responsible countries to take decisive action against these ransomware networks,” Biden said, adding that the administration would “pursue a measure to disrupt their ability to operate” and the Department of Justice (DOJ) had launched a new task force for prosecuting ransomware hackers.

Johnson said a key lesson from the Colonial attack is “how incredibly vulnerable our fuel grid is, our electrical grid is.”

“We are very vulnerable,” Johnson said, and called for more investment to shore up grid resiliency. “We’re spending all these trillions of dollars in infrastructure, let us spend a couple of billion and pre-purchase backup, large power transformers in case there’s an EMP or a GMD issue with our electrical grid.”

Johnson has long advocated for enhanced measures to protect the electric grid from threats of electromagnetic pulse (EMP) disruptions, nuclear weapons, and geomagnetic disturbances (GMD) such as solar storms.

Republicans have denounced it as a “socialist super-package.”

“With everybody hooking up their solar panels and hooking into the grid so they can get a few shekels for the electricity they’re selling into the grid, we become more and more vulnerable,” he said, arguing that it will create “more points of contact that cyberattackers can exploit.”

“We really need to change the direction we’re headed in here. No administration has paid sufficient attention to the vulnerabilities of our electrical grid.

“This could be existential.”

Republicans have repeatedly opposed the Green New Deal, dismissing it as a costly and extreme proposal that would cost jobs and reduce American energy independence.

“True to its name, the Green New Deal is the most amateurish resolution in recent memory,” Environment Subcommittee ranking Republican Rep. Ralph Norman (R-S.C.) said in a statement following the deal’s reintroduction.

“This legislation would change every aspect of American life: what we eat, how we travel, how we stay warm, and even what jobs we can take. This is no way to govern. Simply put, the Green New Deal is an attempt to disguise socialism in the name of environmental protections.”

Markey stated at a press event in Washington on April 20 that “the Green New Deal isn’t just a resolution, it is a revolution,” adding that the proposal “provides the framework we need to confront the intersecting crises our country faces—climate change, a public health pandemic, racial injustice, and economic inequality.”

“We can transform our economy and our democracy for all Americans by addressing the generational challenge of climate change,” he said.

Ocasio-Cortez, who joined Markey at the reboot, reinforced the plan’s sweeping and revolutionary zest.

“We’re going to transition to a 100 percent carbon-free economy that is more unionized, more just, more dignified, and guarantees more health care and housing than we ever have before,” Ocasio-Cortez said. “Do we intend on sending a message to the Biden administration that we need to go bigger and bolder? The answer is absolutely yes.”