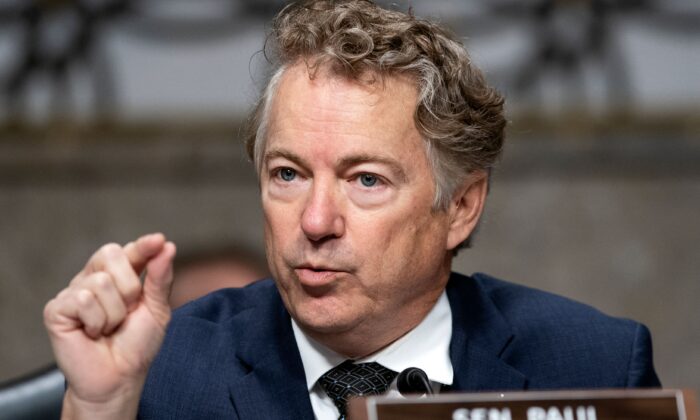 Paul said the measure, proposed as an amendment to the government funding bill, is necessary because Fauci has become a “dictator-in-chief.”

“No one person should have unilateral authority to make decisions for millions of Americans,” Paul, a doctor, said in a statement, adding that one of his goals was “to ensure that ineffective, unscientific lockdowns and mandates are never foisted on the American people ever again.”

Fauci has recommended strict measures during the COVID-19 pandemic, including shutting down businesses deemed non-essential and imposing forced masking on children.

The directors of the new institutes would each take a portion of the responsibilities Fauci currently has.

The directors would be appointed by the president and confirmed by the Senate for a single 5-year term.

Fauci was appointed to his post during the presidency of President Ronald Reagan, a Republican. Fauci was not confirmed by the Senate.

The amendment, if passed, “will create accountability and oversight into a taxpayer-funded position that has largely abused its power, and has been responsible for many failures and misinformation during the COVID-19 pandemic,” Paul said.

An NIH spokesperson told The Epoch Times via email that the agency does not comment on pending legislation.

Fauci and the institute he heads did not return requests for comment.

Paul’s office didn’t respond when asked if he has secured support for the measure from any colleagues.

Democrats control both chambers of Congress and have frequently praised Fauci throughout the pandemic, while Paul and many fellow Republicans have been increasingly critical of the doctor.

Fauci has said he made policy recommendations based on the scientific data at the time when each recommendation was made and that the science on the pandemic has repeatedly evolved.