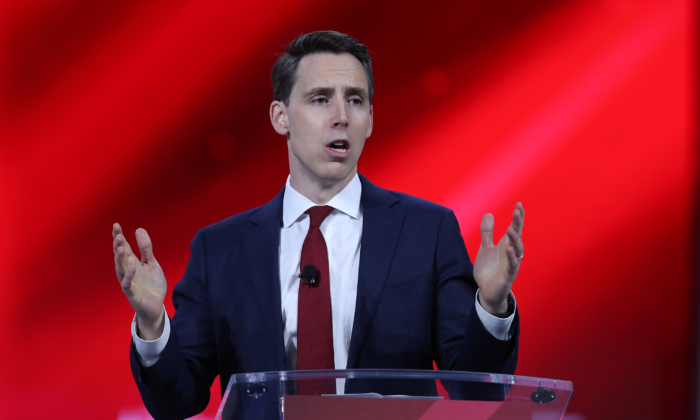 Sen. Josh Hawley (R-Mo.) on Nov. 2 introduced legislation that seeks to bolster Taiwan’s ability to defend itself in the event that the self-ruled island is attacked by China.

“Taiwan is in grave danger, but the future is not yet written,” Hawley wrote in a press release introducing the Arm Taiwan Act of 2021.

The bill (pdf), Hawley said, would strengthen Taiwan’s defenses against a Chinese invasion by allocating $3 billion annually for a new Taiwan Security Assistance Initiative to ramp up the island’s deployment of asymmetric defense capabilities.

It would task the secretary of defense to form the security initiative and authorize $3 billion annually for it for fiscal years 2023 through 2027.

The funds would specifically accelerate Taiwan’s deployment of “asymmetric capabilities necessary to delay, degrade and negate a Chinese invasion” against the island, the legislation states.

Hawley cited warnings from U.S. and Taiwanese officials that “China may try to invade Taiwan over the next few years.”

“We must do everything in our power to help Taiwan urgently strengthen its defenses. If China’s recent actions have shown anything to the world, it’s that Beijing will stop at nothing in its quest to dominate the Indo–Pacific and then the world,” Hawley said in a statement. “We must not let them succeed.”

The Chinese Communist Party (CCP) claims the self-ruled island of Taiwan as a province of China. The democratically governed island has its own constitution, military, and ruling party.

Beijing has escalated military harassment against the island in recent weeks, including through a show of force from the Chinese military over Taiwan’s air defense zone.

Chinese leader Xi Jinping in early October vowed to achieve “reunification of the nation” in a speech, calling the island’s independence a “serious hidden danger to national rejuvenation.”

The United States currently maintains a decades-long foreign policy known as “strategic ambiguity,” meaning that it is deliberately vague on the question of whether it would come to Taiwan’s defense.

However, Washington is required by law—the Taiwan Relations Act (TRA)—to provide the island with military equipment for its self-defense.

Taiwan President Tsai Ing-wen, who previously said the island will do “whatever it takes” to safeguard it against mounting CCP aggression, confirmed last week that for the first time in four decades there are U.S. troops on Taiwanese soil.

Tsai said she’s confident the United States would defend Taiwan if it were attacked by China.

“I do have faith, given the long-term relationship that we have with the U.S., and also the support of the people of the U.S. as well as the Congress,” she told CNN in an interview aired on Oct. 27. “The administration has been very helpful.”

President Joe Biden and Xi are expected to hold a virtual meeting before the end of the year, according to White House national security adviser Jake Sullivan.