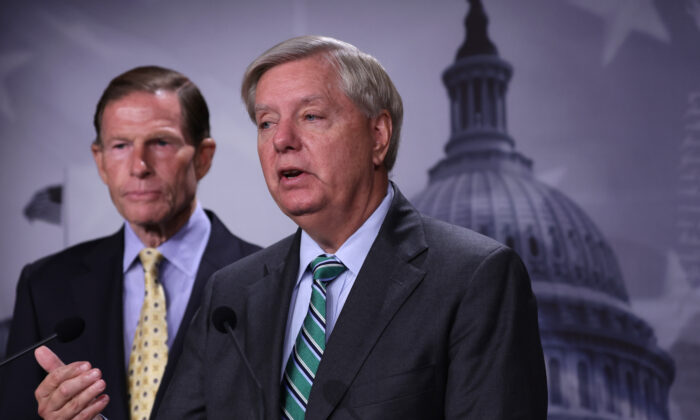 U.S. Sens. Lindsey Graham (R-S.C.) (R) and Richard Blumenthal (D-Conn.) (L) speak to members of the press during a news conference at the U.S. Capitol in Washington, on Sept. 14, 2022. (Alex Wong/Getty Images)
By Joseph Lord

Sen. Lindsey Graham (R-S.C.) on Nov. 22 testified before a grand jury in Atlanta probing the 2020 election.

Graham’s appearance came after a concerted effort by the South Carolina Republican to avoid taking the stand in an investigation about the role that allies of President Donald Trump may have played in allegedly trying to overturn the results of the 2020 presidential election in the state.

Fulton County District Attorney Fani Willis initiated the investigation after a phone call between Trump and Georgia Secretary of State Brad Raffensperger was leaked to the press.

Graham’s office confirmed that Graham had taken the stand in the investigation.

“Today, Senator Graham appeared before the Fulton County Special Grand Jury for just over two hours and answered all questions,” Graham’s office said in a statement. “The Senator feels he was treated with respect, professionalism and courtesy. Out of respect for the grand jury process he will not comment on the substance of the questions.”

The details of Graham’s testimony have not been disclosed as of yet.

In preparation for the midterms, the investigation stalled recently.

Still, Willis’ request to subpoena Graham had already been approved in July. There was a delay as Graham fought the subpoena in court.

The U.S. Supreme Court ruled on Nov. 1 that Graham had to testify.

Graham had argued that he could not be subpoenaed as part of the investigation because of the Constitution’s “speech and debate” clause, which grants some protections to sitting members of Congress.

The nation’s top court upheld an appeals court ruling that found Graham could not be questioned on actions related to legislative fact-finding but said he can be questioned over other matters.

Graham’s testimony comes as Democrats and Republicans continue to tussle over how to quantify Trump’s role in the 2020 election.

Democrats, particularly on the House Jan. 6 Committee, have claimed that Trump undertook a concerted effort to overturn the 2020 election. According to their narrative, this effort culminated in the 2021 Capitol breach.

During the aftermath of the 2020 election, when Trump was trying to determine how to move forward on his claims of widespread election fraud, several attorneys in Trump’s inner circle supported a push to refuse to certify electoral slates from states where concerns of election fraud were most prevalent.

This position held that Vice President Mike Pence had the power under the 12th Amendment to reject some electoral slates.

The argument, most forcefully defended by Trump attorney and ally John Eastman, put Eastman in the sights of the Democrat-dominated House Jan. 6 committee, and more recently, in the sights of Fulton County District Attorney Fani Willis.

Eastman was forced to testify in September.

Willis, a Democrat, has in the past demanded testimony from other Trump allies, including former White House Chief of Staff Mark Meadows and ex-campaign lawyer Sidney Powell, as part of a probe into the 2020 election.

In a court filing at the time, Willis defended her probe by citing its relevance to Georgia (pdf). Specifically, she cited meetings between Meadows and other Trump allies touching on “allegations of voter fraud and the certification of the electoral college votes from Georgia and other states.”

Willis has been working with the grand jury to probe attempts by Trump and a number of his allies to convince officials in Georgia to investigate possible fraud following the 2020 election.

She asked the grand jury for help with the probe, which she says is based on information that indicates “a reasonable probability” that the election in Georgia was “subject to possible criminal disruptions.”

Willis says the investigation is based on a “multi-state, coordinated plan by the Trump campaign to influence the results of the November 2020 elections in Georgia and elsewhere,” echoing similar statements made by the Jan. 6 panel in Congress.

Following Eastman’s testimony to the probe, Eastman’s attorneys blasted the effort as “unprecedented” and called on observers “of any political persuasion” to decry it.

“By all indications, the District Attorney’s Office has set itself on an unprecedented path of criminalizing controversial or disfavored legal theories, possibly in hopes that the federal government will follow its lead,” the attorneys wrote.

“Criminalization of unpopular legal theories is against every American tradition and would have ended the careers of John Adams, Ruth Ginsburg, Thurgood Marshall and many other now-celebrated American lawyers,” they continued. “We ask all interested observers of any political persuasion to join us in decrying this troubling development.”

Like Kemp and Graham, Eastman attempted to avoid cooperation with the probe but was later required to by order of a judge.

The Jan. 6 panel in the House is set to dissolve at the end of this Congress, but the probe in Georgia has received a green light in  litigation and is likely to carry on into next year.