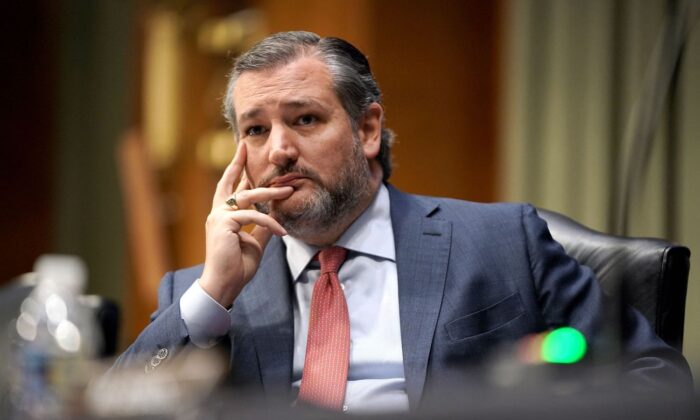 Sen. Ted Cruz (R-Texas) introduced a bill that would bar the federal government from creating and maintaining a database of who has received COVID-19 vaccines. White House officials had just announced a plan to send outreach teams door-to-door in areas with relatively low vaccination rates.

Cruz, in a tweet, suggested that statements from President Joe Biden and White House press secretary Jen Psaki are concerning.

“When the Biden admin calls for ‘targeted’ ‘door-to-door outreach’ to get people vaccinated, it comes across as a g-man saying: ‘We know you’re unvaccinated, let’s talk, comrade,’” Cruz wrote Thursday. “My bill to ban federal vaccine passports prohibits the feds from maintaining a vaccine database.”

Biden announced the door-to-door vaccination initiative on Tuesday, saying that “we need to go community by community, neighborhood by neighborhood, and often times door by door—literally knocking on doors to get help to the remaining people.” Biden and Psaki didn’t provide many details about the plan, including where it would target, how long it would last, and what the outreach teams will even do.

Health and Human Services Secretary (HHS) Xavier Becerra pushed back against criticism of the plan, saying “it is absolutely the government’s business” to send officials out to knock on people’s doors. “Knocking on a door has never been against the law,” and American citizens “don’t have to answer. But we hope you do,” he said.

Later on Thursday, the HHS secretary wrote in tweets that the federal government doesn’t keep a database of who is or isn’t vaccinated against COVID-19.

In one tweet, Becerra said that his comments to CNN were “taken wildly out of context,” adding: “We’re encouraging people to step up to protect themselves, others by getting vaccinated. It’s the best way to save lives and end this pandemic.”

The messaging about outreach teams also drew backlash from other Republican lawmakers.

“How about don’t knock on my door. You’re not my parents. You’re the government. Make the vaccine available, and let people be free to choose. Why is that concept so hard for the left?” Rep. Dan Crenshaw (R-Texas) wrote on Twitter.

“In 2021, the nine most terrifying words in the English language: ‘I’m from the government, have you been vaccinated yet?’” wrote Rep. Andy Biggs (R-Ariz.) on the social media platform.