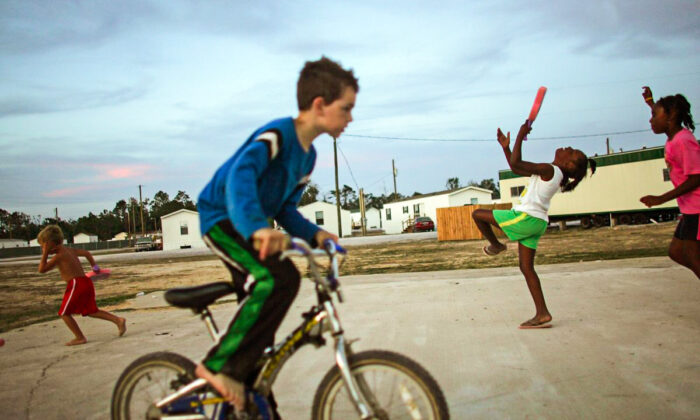 Children play in the FEMA trailer park where they live after their homes were destroyed by Hurricane Katrina May 27, 2006 in Waveland, Mississippi. The Gulf Coast has been slow to recover from the storm and the next hurricane season begins June 1st. (Mario Tama/Getty Images)
Russia-Ukraine War

At a time of rising tension between NATO and Russia, the U.S. government agency responsible for managing military conscription has suggested how conscientious objectors might be treated should a draft be reinstated.

“In the event of a draft, our agency would partner with [the Federal Emergency Management Agency] to provide opportunities to conscientious objectors to ensure our nation keeps moving forward,” the Selective Service System’s (SSS) March 23 tweet reads in part.

It linked to a webpage that stated in part, “Today, all conscientious objectors are required to register with the Selective Service System.” The webpage didn’t provide any further explanation as to how SSS would partner with FEMA.

“I conscientiously object to compulsory ‘service’ of any type,” posted Twitter user “AL – 7.62.”

Michael Migliana, the SSS’s acting deputy director, in an email interview with The Epoch Times, “While there is currently no draft, registration with the Selective Service System is the most publicly visible program during peacetime that ensures operational readiness in a fair and equitable manner.”

Pointing out that the agency had sent out a tweet with the identical message on July 19, 2021, he said the latest tweet was “part of our overall awareness campaign,” as FEMA is one of many state and federal agencies to which conscientious objectors could be assigned as part of the Alternative Service Employment Network, if a draft were to be authorized.

FEMA is one of seven such entities that has entered into a new or updated memorandum of understanding with the Selective Service System, Migliana said.

“In the past, the SSS has also had MOUs with some private nonprofit entities to accept assignments of conscientious objectors for alternative service,” said Edward Hasbrouck, a journalist who covers selective service issues for the non-interventionist website Antiwar.com.

“Many of those MOUs, including all of the ones with private entities [nonprofits], were agreed to years ago and had lapsed.

“As part of its efforts to make its ‘readiness’ appear more credible, even though in fact it’s clear that it would not be able to carry out a draft in the face of the likely resistance, the SSS has made it a priority recently to re-up and negotiate more of these agreements.”

“If authorized by the president and Congress, our agency would rapidly provide personnel to the Department of Defense while, at the same time, providing an alternative service program for conscientious objectors.”

“What the SSS doesn’t say, of course, is that most people who object to any particular war don’t qualify for conscientious objector status, and many people who ought to qualify will probably be turned down by militarist draft boards.”

The agency currently requires virtually all male U.S. citizens and male U.S. immigrants between the ages of 18 and 25 to register. Women are exempt.

To authorize a new draft, Congress would need to amend the Military Selective Service Act and authorize the induction of troops by the president.

The potential for direct conflict between NATO and Russia has increased following Russia’s invasion of Ukraine last month.

To Hasbrouck, events in the country illustrate the folly of military conscription.

“The Russian invasion of Ukraine is demonstrating the risks of unrealistic over-reliance on the will to fight of a conscript army, and the way that the perceived availability of a bottomless reserve of draftees emboldens war planners and makes military adventurism more likely,” he said.

Article 5 of the North Atlantic Treaty that established NATO in 1949 added teeth to the principle of collective defense. It means an attack on any member state will trigger a response from all other members.

The NATO states that directly border Russia are Norway, Latvia, Lithuania, Estonia, and Poland. Turkey, a NATO member that has maintained more ambivalent relations with Moscow, is separated from Russia by the Black Sea.

On March 24, NATO released a statement explaining its defense readiness doctrine against Russia. The document didn’t call for a no-fly zone above Ukraine, as advocated by Ukrainian President Volodymyr Zelenskyy.

Selective service was first established by the Selective Service Act of 1917, shortly after the United States entered World War I. The United States switched to an all-volunteer military under President Richard Nixon in 1973.

President Gerald Ford then ended the registration requirement for men aged 18 to 25 through a 1975 proclamation.

It was President Jimmy Carter who, through a 1980 proclamation, resurrected the Selective Service System by again mandating that young men register.