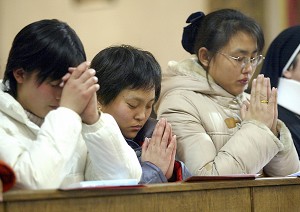 Chinese Catholics pray at the officially sanctioned Wangfujing Cathedral, as the communist regime continues a crackdown on underground churches and sects, in what some critics consider as one of the harshest crackdowns against underground Christians in years, with dozens of churches demolished and many worshippers arrested. (Goh Chai Hin/AFP/Getty Images)
China

Before the Tiananmen Massacre on June 4th, 1989 (“June 4th”), she was very cheerful. Before “June 4th” she loved to sing and dance. But after “June 4th”, she changed completely. She became very quiet. She searched everywhere for answers to her questions. Ultimately, she found her answers within the Bible and became a Christian.

At the time, the Chinese authorities had covered up the truth of “June 4th.” Some of Chen Xin's acquaintances who had made business trips to Beijing reported that many people were missing. She also overheard that many people had been killed very violently.

A young soldier was discharged from the Liberation Army and returned to his hometown in Baotou City. The scenes of “June 4th” in Tiananmen Square appeared and reappeared in his mind unceasingly. The mental torture was made even worse by the fact that he had been warned by the Chinese Communist Party (CCP) not to tell anyone what he had witnessed. The stress proved to be too great, and he suffered a mental breakdown within a few months of his return.

He was mostly unconscious during the first few months of his breakdown. While asleep, he would constantly ramble on about the atrocities he witnessed in Beijing. If he didn't kill the students, the authorities would kill him. Even still, he could not bring himself to go through with it. The students beat him. He took off his uniform to avoid the beatings, but was then beaten by the soldiers who mistakenly thought that he was a student.

He had witnessed plain-cloth soldiers beating students to unconsciousness with sticks, and then burning them alive. When he was discharged from the army, he was given 60,000 yuan to keep silent. As a result of being unable to speak about, and thus come to terms with what he had seen, he went mad. In his early 40s, he was still unable to work, and he had already spent all of the money. The neighbors all whispered, “If his mother dies one day, how is he going to survive?” Finding the Pure Heart

Through constant seeking, Chen Xin has had the opportunity to read forbidden materials. She wanted to know what those materials forbidden by the CCP were all about and why the CCP didn't want people to read them. She came across a collection of CDs from Pastor Tang Suirong, Pastor Zhang Boli, and Yuan Zhiming, and they have since found a very special place in her heart. In 1990, Chen Xin became a Christian and was baptized.

Although many people were of different mindsets, many had come to the faith in order to find a safe harbor for their souls. Chen Xin expressed that, during the early stages of reform and opening up, people were relatively pure regarding their faith. However, with the expanding of its economic strength, and interference from the government, the church has lost its shape. The people were forbidden to read the last book of the “Holy Bible” New Testament- Revelation, which is the prophecy of the world's last phase.

“And I saw a grey horse, and the name of him who was seated on it was Death; and Hell came after him. And there was given to them authority over the fourth part of the earth, to put to destruction by the sword, and by taking away their food, and by death, and by the beasts of the earth.” (Revelation 6:8) Chen Xin said that some people understood the “grey horse” as “becoming mildewed and rotting,' but she understood it as the rotten CCP.

The CCP criticized orthodox Christianity through its official Christian publication, Tian Feng magazine. It claimed that the “Holy Bible” was wrong, and forbad people from reading it. Instead, it told people to read the weakened and modified version of The Bible. Chen Xin said that she believed the reason Revelations was outlawed is because the CCP has a guilty conscience. It fears that people will make the connection and match its corruption and embezzlement with the verses in Revelations. It is afraid of people knowing the prophecy in the “Holy Bible” that the CCP will perish.

In a church run by the CCP it was stated that, “Political power is higher than the theocracy,” Chen Xin does not agree, “The government cannot represent the theocracy, because the CCP didn't come into being until 1921. Yet our God was born when the world was created. Theocracy is certainly much higher than political power.”

According to Chen Xin, the Chinese Religious Bureau sends spies into every church to participate in their activities. They secretly watch to see if there is any speech harmful to the CCP. If there are pretty woman, the spies will often develop sexual relationships with these women to bring disgrace to the religion. They promote prostitution in the Church, claiming it to be “Keeping pace with time,” and the mind should be open. Chen Xin said that those were fake Christians, who sing the song of praise very loudly on the surface, but live a life of luxury and do not do or contribute anything meaningful.

She Became Detached After Gaining Faith

After gaining faith in Jesus Christ, Chen Xin lost her human desires, and found that nothing could tempt her anymore. She found this to be quite odd. When she was young, she appreciated pretty clothes and liked to dress in very stylish attire. She also liked comparing her attire with that of her colleagues. Now she looks as though she belongs to a different time, wearing a much more plain style of dress.

“We never fight. Everyone is encouraged to speak their minds. Sometimes we have conflicts, but as soon as it is pointed out we take care of it and the problem is gone. There is no leader or coordinator, we're like a family and feel very warm towards each other. Deep in our hearts we feel like children of the same mother. We each supply what the others need, and have thus distinguished ourselves from everyday people.”

Since resigning from her job in 1994 and beginning the promotion of Christianity, Chen Xin has not earned a penny. For the last twelve years she hasn't worried even if she finds herself with only ten yuan in her pocket. She doesn't pursue fortune like others in today's society. Even though she had many good opportunities to make money in the past, she has given them up.

She has sold all of her jewelry, and wears second-hand clothes contributed through donations. In order to promote Christianity, like many other volunteers, Chen Xin has also sold blood. The Bible says that Christians should contribute one tenth of their income to God. In Baotou City, the rate has to be 50 percent in order to make it possible to keep up with the mission. “What we're doing is most pleasing to God, and what those false believers do is so shameful.”

The Foretelling Of The CCP's Destiny Is In The Historical Facts

“If you have a chance to come here, you'll see that people can hardly make a living. It looks splendid on the surface, the buildings get taller and taller, but the living standard is getting lower and lower, and people's minds are in a state of disunity. It is so heartbreaking that one can hardly breathe. It is much like a chicken being killed, it has no strength to resist being killed. You will feel it and witness it if you live here, it is truly corrupt and dark.”

“Because my maternal grandfather left for Taiwan, my mother was labeled as a “Counter-revolutionary individual.” My mother is a historical witness to the CCP's devastation. The past fifty years of her life can be viewed as a living history of blood and tears.”

From the Shenzhou CD she has learned that, for the past several thousand years, power shifts have taken place frequently. Regimes change constantly, and this has become a historical rule.

An Unexpected Phone Call From Overseas

Chen Xin and her fellow volunteers encourage each other. In order to accomplish their grand missions they need a lot of support from many people. The number of her family church members is rapidly expanding. She wants to say what the CCP forbids her to say. She says that farmers very easily accept her preaching because they have nothing to lose. She hopes very much that God takes care of them.

On Oct 16, 2006, she received a phone call from the Global Service Center for Withdrawing from the CCP. She withdrew immediately without hesitation. She had unofficially withdrawn from the CCP 12 years ago, as the church required. Now she had agreed to resign formally based on what the Service Center had told her. She then passed the message on to her more-than-thirty-volunteer co-workers. Looking forward, the road will be as difficult as it was in the past. But in her heart, Chen Xin knows that having faith in a righteous belief gives her hope and strength.