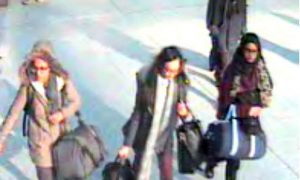 A fighter from ISIS takes position in a destroyed in Damascus, Syria, on Sept. 22, 2014. (Rami Al-Sayed/AFP/Getty Images)
US

Saturday Night Live may have gone too far this time.

A piece from the sketch comedy show made fun of ISIS, or the Islamic State in Iraq and Syria. It spoofed a Toyota ad about a father and his daughter that aired during the Super Bowl. In the Toyota ad, it showed a father taking his daughter a U.S. Army hitch.

SNL ran with it, and showed a similar scene, but instead of a father taking his daughter to a hitch, the daughter (played by SNL host Dakota Johnson of “50 Shades of Grey” fame) instead went to join ISIS in Syria. She jumps into a vehicle with ISIS-looking extremists, who are complete with beards and weapons. “ISIS. We’ll take it from here, Dad,” the tagline says, per AdWeek.

When it aired, it drew mixed reactions from users on social media sites.

When you have loved ones being slaughtered by ISIS, the #SNL skit doesn’t seem so funny. Absolutely disgusting @nbcsnl

Can someone please explain to me how that Toyota commercial/ ISIS skit on SNL was funny? Absolutely sick. Man @nbcsnl has lost it #unreal

“It’s only ISIS” Not funny SNL, not funny at all especially to military moms whose kids are in the fight #SNL#militarymoms

#nbc #SNL Really? Skits about ISIS? You are whacked and sick. These are terrorists who are chopping off the heads of our citizens. Not cool

Of course it may also be said, “If you can be offended by comedy, why are you even watching things that are trying to be funny?” #SNLISIS

@livefrome @eonline ISIS skit on #SNL was funny. Some people just aren’t happy, unless they are offended. #LiveFromE

SNL ISIS skit was hilarious. Some people have no sense of humor.