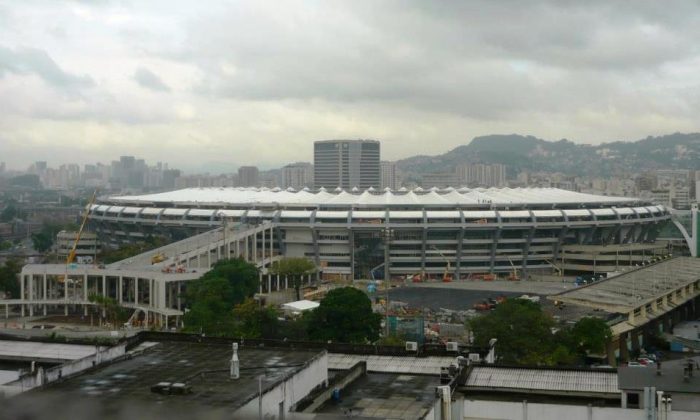 The Maracanã Stadium pictured on May 6, 2013. The venue is one of the main stadiums used during the 2014 World Cup and the 2016 Summer Olympic Games. Brazilian authorities are ensuring the public that security will be a top priority during the games. (Cortesy of Rafael Souza)
Americas

ITATIBA, Brazil—Security at sporting and other mass events is in the spotlight more than ever in the wake of the Boston Marathon terrorist attacks. In Brazil, which will host two of the world’s major sporting events, authorities are trying to reassure the public that that every protective measure is being taken.

“We are confident in the excellent quality of the security planning for the Rio 2016 Olympic and Paralympic Games and we continue to work in close partnership with the federal, state, and city governments to deliver this. We are fully confident that the 2016 Games, and the test events preceding them, will take place in a safe and enjoyable atmosphere.”

Rio de Janeiro will be hosting the FIFA World Cup in 2014, and the Summer Olympic Games in 2016.

Brazil’s Ministry of Tourism estimates that 600,000 foreign tourists will be coming to Brazil for the World Cup, with over 400,000 of them expected to stay in Rio. The events will take place from June 12 to July 13.

Besides the threat of terrorism that has been heightened in recent times, Brazil has had a long history of violence in the favelas, or slums, where drug dealing gangs have held a grip on the population.

The instatement of the Pacifying Police Units (UPP) has been instrumental in reclaiming these territories from the gangs. Increasing the number of these policing units will be one of the security measures taken by the authorities ahead of the sporting events.

According to a study by the Rio-based education institute Fundação Getúlio Vargas, the UPP has been an effective model to implement security.

“This experience [UPP] consisted of a new model of public safety and policing, which went beyond the resumption of the territories under the influence of parallel power [gangs], proposing effective measures to assist and approach the people,” the study says.

Ricardo Freitas, a professor and co-ordinator of the Graduate School of Social Communication at the State University of Rio de Janeiro, says security has been a major issue in Rio, but the situation has improved over the last two decades.

“The current government has changed this picture somewhat with the pacification of favelas,” Freitas says.

Some in Rio are expressing concern that while the authorities have put security as the top priority for the sporting events, their priorities may shift once the games are over.

Stéphanie Krieger, a psychology student in Rio, cites the 2007 Pan American Games held in Rio as an example.

“After [the event], we went back to the same situation as always,” she says.

José Paulo Ferreira Moreira, a 19 year old student of social communication, says that while he is confident that the authorities will do their best to ensure security, actions to improve security should continue after the major events.

“I just think it’s no use if you make the surface pretty in an entire state, a part of a country, to say that everything is fine and when you finish the big events, all issues resurface,” Moreira says.

The issue of security in Rio grabbed headlines again last month after an American tourist was gang raped by three men while her boyfriend was handcuffed.

Zulma Henrique de Faria Pereira, an 80-year-old resident of Rio who is a teacher, says security is a concern in Rio, and it’s even worse for visitors. She thinks it’s a risk to bring the World Cup to the city.

“I feel very insecure. Many people get away with crimes. Brazil should have more education and end impunity.”

According to a survey by the Institute of Public Security of Rio de Janeiro released earlier this month, there were close to 5,000 female victims of rape in Rio in 2012, with children accounting for half of them.