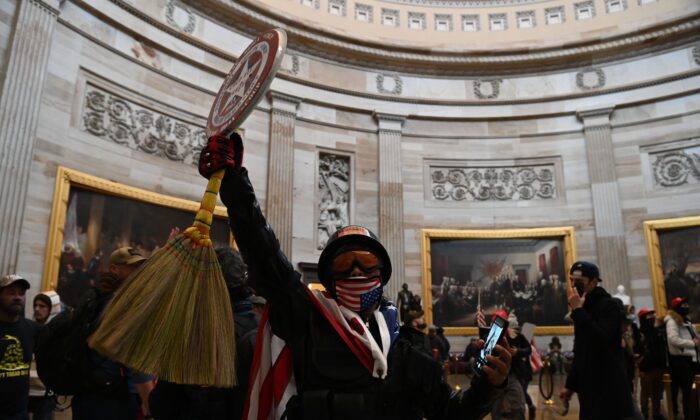 A group of protesters enter the U.S. Capitol Rotunda in Washington on Jan. 6, 2021. (Saul Loeb/AFP via Getty Images)
US News

U.S. Capitol Police intelligence officials failed to share information they received in the days and weeks leading up to Jan. 6, contributing to the agency being unprepared for what transpired that day, according to a new Senate report.

The federal intelligence community, led by the FBI and the Department of Homeland Security, did not issue a threat assessment warning of potential violence targeting the U.S. Capitol on Jan. 6, despite online calls for violence, the 128-page bipartisan report says.

The U.S. Capitol Police’s (USCP) lead intelligence component, meanwhile, became “aware of the potential for violence” in the days preceding Jan. 6 but “failed to fully incorporate this information into all of its internal assessments,” the bipartisan group discovered.

The failure to warn of potential violence was combined with the USCP being ill-prepared to prevent or respond to security threats on Jan. 6, which contributed to the breach of the Capitol during a joint session of Congress, according to the report, an analysis previously offered by Steve Sund, the former chief of the Capitol Police.

“The events of January 6th were horrific, and our bipartisan investigation identified many unacceptable, widespread breakdowns in security preparations and emergency response related to this attack,” Sen. Gary Peters (D-Mich.), chairman of the Senate Homeland Security and Governmental Affairs Committee, said in a statement. “Our report offers critical recommendations to address these failures and strengthen security for the Capitol to prevent an attack of this nature from ever happening again.”

“Over the past five months, our committees have worked together in a bipartisan way to thoroughly investigate the intelligence and security failures prior to and on January 6, and to develop recommendations to address them,” added Sen. Roy Blunt (R-Mo.), ranking member of the Senate Rules and Administration Committee. “These recommendations are based on an extensive fact-finding effort that included interviews with key decision makers, firsthand accounts from law enforcement personnel, and the review of thousands of documents. Our focus now should be on immediately implementing these recommendations.”

Peters and Blunt issued the report jointly with Sen. Rob Portman (R-Ohio), the top Republican on the Homeland Security panel, and Sen. Amy Klobuchar (D-Minn.), chairwoman of the Rules Committee.

Members of Congress met on Jan. 6 at the U.S. Capitol to certify electoral votes submitted by states. Protesters and rioters stormed the building in the early afternoon, angered by then-Vice President Mike Pence’s refusal to intervene in the certification process. People who breached the building have said they believe widespread fraud occurred in the election and did not like how officials in some states dramatically altered voting rules amid the COVID-19 pandemic.

Prosecutors have charged over 450 people in the breach and expect to charge at least 100 more, according to a recent court filing.

The intelligence failures, coupled with the Capitol Police Board not asking ahead of time for Guard assistance, meant Guardsmen were not activated, staged, and prepared to quickly respond to the Capitol breach.

It took over three hours following a request for help for Guardsmen to arrive on Capitol Hill, officials testified in March.

The senators issued a series of recommendations, including advising USCP to require a department-wide operational plan for special events and to make its Civil Disturbance Unit a permanent component to ensure the officers in the unit are properly trained and equipped at all times.

USCP said in a statement that it agrees improvements are needed in intelligence analysis and dissemination.

“Law enforcement agencies across the country rely on intelligence, and the quality of that intelligence can mean the difference between life and death. The USCP also acknowledges it must improve how it collects and shares intelligence with its own officers and stakeholders and has made significant changes since the attack on January 6,” it said. “The Department has also made major changes to its now Department-wide operations planning processes, even recently bringing on a National Special Security Event planning and coordination expert from the United States Secret Service.”

The Pentagon told The Epoch Times that it is aware of the report and reviewing its contents.

The National Guard referred comment to the secretary of the Army. The secretary, the FBI, and the Department of Homeland Security did not immediately respond to requests for comment.