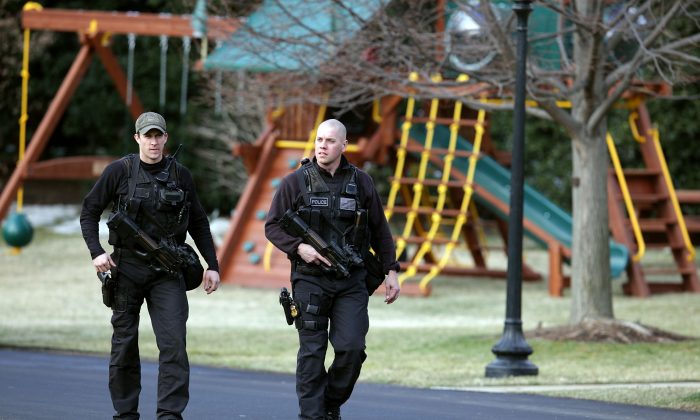 Two U.S. Secret Service agents carry machine guns as they walk past a new swing set on the south lawn of the White House on March 6, 2009 in Washington, DC. U.S. (Photo by Mark Wilson/Getty Images)
2016 race

Secret Service Sticks to Its Guns

The United States Secret Service shut down calls for firearms to be allowed in the Republican National Convention held in Ohio this coming July.

“Only authorized law enforcement personnel working in conjunction with the Secret Service for a particular event may carry a firearm inside of the protected site,” said agency spokesman Kevin Dye, according to The New York Times.

Only authorized law enforcement personnel working in conjunction with the Secret Service for a particular event may carry a firearm inside of the protected site.

Ohio has a an open-carry policy for firearms, but the Quicken Loans Arena in Cleveland doesn’t allow for firearms on its premise.

The statement comes in the wake of a petition that grew to over 50,000 signatures supporting the right to bear arms for the event. The petition argues that banning guns “is a direct affront to the Second Amendment and puts all attendees at risk.”

No Republican candidate has responded to the petition or the announcement, but both Donald Trump and Ted Cruz have both argued for stronger support of the second amendment.

Guns in the Classroom for Kansas Universities

The petition, according to CBS, was started by a a self-described liberal Democrat, and was initially intended as satire.

The Secret Service said that it has the authority to ban guns from sites visited by presidential candidates under its protection.