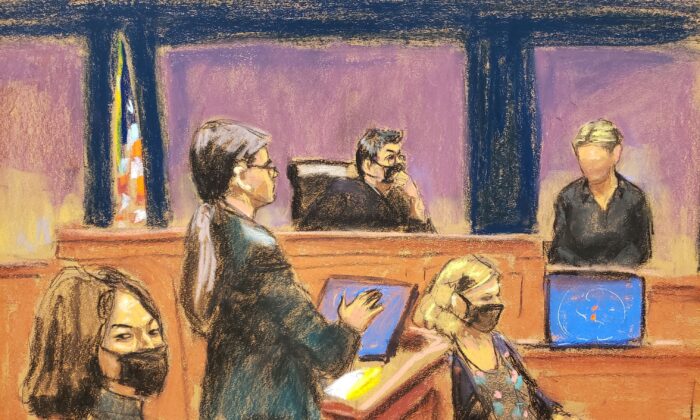 Witness "Kate" is questioned by prosecutor Lara Pomerantz during the trial of Ghislaine Maxwell, the Jeffrey Epstein associate accused of sex trafficking, in a courtroom sketch in New York City, N.Y., on Dec. 6, 2021. (Jane Rosenberg/Reuters)
Judiciary

NEW YORK—The prosecution called a second alleged victim to the witness stand in the Ghislaine Maxwell sex trafficking case in federal court on Monday as the trial entered its sixth day.

Once again, to protect anonymity, the witness chose to use a pseudonym, this time “Kate.”

Unlike the first alleged victim in the trial “Jane,” Kate was of the age of consent when the alleged abuse she suffered began.

Kate testified about how she first met Maxwell in Paris, and then how Maxwell introduced her to Jeffrey Epstein.

When she began testifying, Kate spoke softly, almost mumbling, with a British accent.

Kate came from the vulnerable in the population (she had an ill mother). Kate said Maxwell made her feel “really special” and told her how Epstein could help her in a music career.

Just as Jane was invited to Epstein’s Palm Beach estate for tea, Kate said she was invited to Maxwell’s London townhouse (Kate was living in London at the time), also for tea.

At a later date, Kate met Epstein at Maxwell’s residence.

Kate said she weighed 95 pounds at the time and Maxwell commented on how strong she was.

She claims Maxwell said to her, “Why don’t you give his feet a little squeeze and show how strong you are?”

Kate said she gave Epstein a foot massage and then he asked for her to massage his shoulders, which she did.

A few weeks later, Maxwell asked Kate to fill in for a professional masseuse after she cancelled his appointment.

This is when Kate was introduced to one of Epstein’s many “massage rooms,” she recalled.

She claims that when Epstein removed his robe, “he was naked” and then proceeded to initiate sexual contact.

The second time Maxwell brought Kate to the massage room, she claims Maxwell left saying, “Have a good time.” Kate testified that during this massage, Epstein committed “a sex act.”

As stated in Roccio’s five stages of grooming, Maxwell started to normalize sex by talking about it regularly, including about the size of Epstein’s genitals, and asking Kate if she knew of any girls who’d like to perform oral sex on him.

“You know what he likes; cute, young, pretty … like you,” said the 44-year-old, quoting Maxwell.

In keeping with the five stages of grooming, Maxwell gave Kate a Prada handbag for her 18th birthday.

Kate got more confident as her testimony went on.

While staying at the Palm Beach residence, Kate found a schoolgirl costume on her bed. She said Maxwell placed it there and convinced her to wear it for Epstein.

“I didn’t know how to say no,” Kate said, adding that she didn’t know what the consequences of refusing would be.

Kate claims it was then he had “a sex act” with her.

She also disclosed that she has received $3.25 million from the Epstein Victim’s Compensation Fund.

On cross examination, defense attorney Bobbi Sternheim questioned Kate on her extraordinary ability visa, which allowed her to work in the United States in the music industry, as well as the prosecution’s role in helping her obtain a U visa (specifically for victims of crime), for when her first visa expired.

The defense also questioned her ability to remember events accurately, having been a substance abuser during the discussed time period.

Kate admitted she had abused alcohol, cocaine, and sleeping pills in her teens and early 20s at the time of the alleged abuse, but has been clean since May 1, 2003.

She then testified that she married at age 23, which Sternheim challenged by referring to past statements where she said she was married at 18 or 19, and then 20 or 21.

In a second slip-of-the-tongue during the trial by the defense, Sternheim referred to Maxwell as “Mrs. Epstein.”

Sternheim then presented the court with emails that Kate had sent to Epstein when he was incarcerated years later, saying they were initiated by Kate.

Statements revealed that millions of dollars went into Epstein’s account, much of which was transferred to Maxwell’s account, and in one instance, Maxwell purchased a helicopter with some of the funds. Moe’s questioning essentially “followed the money.”

Under cross, defense attorney Christian Everdell attempted to prove that other, authorized individuals can spend money that belongs to someone else. It was a daunting task for him because there were endless objections from the prosecution.

He also stated that these statements did not show who made the transactions and McHugh agreed.

The next two witnesses were FBI agents. The first was Kelly Maguire, who is part of the Child Exploitation and Human Trafficking Task Force. She executed a search warrant at Epstein’s residence in Manhattan for two days in July 2019.

Maguire mostly spoke of the CDs and electronic devices seized in the raid. She also reviewed photos taken of the interior of the residence at the same time.

On cross, the defense once again stated that the photos, taken in 2019, cannot accurately indicate what the residence looked like in 1994, when much of the abuse allegedly happened. Maguire agreed.

The second special agent was Kimberly Meder of the same task force.

Meder was only on the stand for a few minutes when Judge Alison Nathan called it a night, ending the sixth day of the trial.

Correction: The previous version of this article misspelled the name of Special Agent Kimberly Meder.