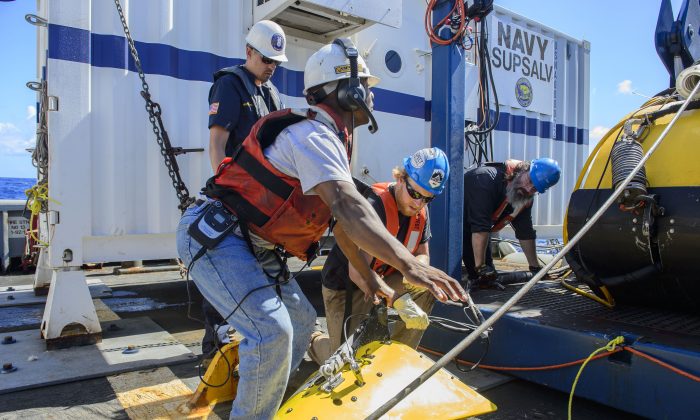 Contractors and Lt. Cmdr. Daniel Neverosky retrieve and secure the tow pinger locater aboard the USNS Apache on Oct. 24, 2015. USNS Apache departed Norfolk, Va., on Oct. 19, to begin searching for wreckage from the missing cargo ship El Faro. El Faro lost power and went down east of the Bahamas during Hurricane Joaquin. (John Paul Kotara II/Navy via AP)
US

WASHINGTON—Investigators will use a deep ocean vehicle to help confirm whether wreckage that searchers found in 15,000 feet of water east of the Bahamas is the cargo ship El Faro that vanished during Hurricane Joaquin.

The U.S. National Transportation Safety Board said in a statement from Washington that a remotely operated vehicle will be sent deep below the ocean surface in an operation that could begin as early as Sunday. The El Faro went missing Oct. 1 with 33 crewmembers on heaving seas.

Authorities also said late Saturday that they want to survey the wreckage and locate a voyage data recorder—or the ship’s “black box”—that could yield clues as to what happened.

An NTSB statement said a specially equipped Navy vessel located wreckage Saturday afternoon in the area of the ship’s last known position. It said the wreckage is “consistent with a 790-foot cargo ship, which from sonar images appears to be in an upright position and in one piece.”

The 790-foot El Faro was reported missing east of the Bahamas, according to the Coast Guard.

Saturday’s announcement by the NTSB, which is investigating the disappearance, came after a ship it contracted for the search from the Navy, the USNS Apache, had spent days combing those waters.

“To confirm the finding, specialists on Apache will use CURV 21, a deep ocean remotely operated vehicle to survey and confirm the identity of the wreckage. This survey could begin as early as November 1,” said the statement emailed by Peter Knudson from the NTSB’s public affairs office in Washington.

The El Faro’s captain had called in before the vessel disappeared saying the ship had lost its engine power during its voyage from Jacksonville, Florida, to San Juan, Puerto Rico. The captain, Michael Davidson, said the ship was listing, and taking on water.

The Coast Guard had searched for the ship for days after El Faro disappeared in the storm, finding debris and one body in a survival suit.

The El Faro was scheduled for retirement from Caribbean duty and for new retrofitting for service between the West Coast and Alaska, company officials have said. Both the El Faro and its sister ship were slated to be replaced by two new ships. Aboard when it disappeared were five engineers from Poland, who were working on the retrofitting as the ship sailed to Puerto Rico.

NTSB investigators have said Davidson intended to pass 65 miles from the center of the storm. Independent maritime experts have said that such a decision would be risky.

The NTSB, an independent federal agency, said coming days will involve documenting the wreckage and debris field, and if possible, recovering the crucial voyage data recorder.

The statement said that if the wreckage is confirmed to be the missing cargo ship, attempts will be made to locate and recover the voyage data recorder. It added that the coming phase of operations is expected to take up to 15 days to complete in ideal conditions, longer depending weather or other conditions encountered.

The Navy search ship departed from Virginia on Oct. 19 after being equipped with state-of-the-art underwater detection equipment. The Apache arrived at the site on Oct. 23 and for three days towed a special device called a towed pinger locator in the water, hoping to pick up sounds of the pinger from El Faro’s voyage data recorder.

The NTSB said that after three fruitless days trying to get a pinger signal, the pinger locator was withdrawn from use and searchers then deployed a special side-scanning sonar system called Orion. Authorities say that system detected the wreckage early Saturday afternoon.

The NTSB said the Orion’s specialized technology creates sonar images as it sweeps the waters, seeking patterns that provide clues to the presence of a missing vessel.