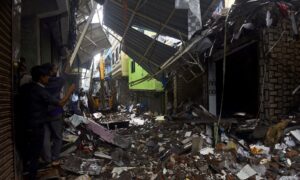 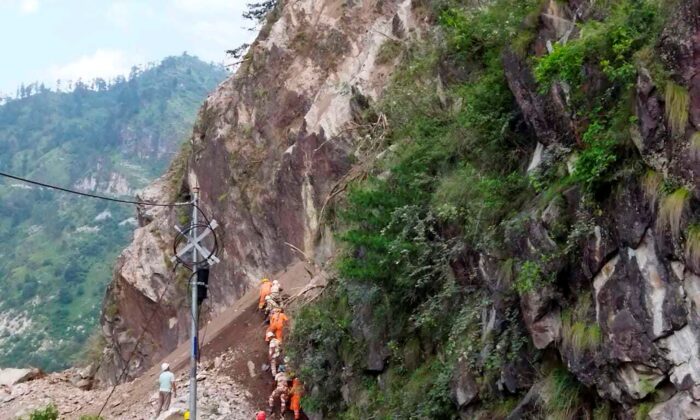 NDRF soldiers working on a rescue operation at the site of a landslide in Kinnaur district in the northern Indian state of Himachal Pradesh, India, on Aug. 11, 2021. (National Disaster Response Force via AP)
India

NEW DELHI—Rescuers resumed their search Thursday for survivors and victims of a large landslide that swept across a highway in the mountains of northern India a day earlier, killing at least 13 people.

A bus, a truck, and two cars were smashed in the landslide in Himachal Pradesh state’s Kinnaur district. Dozens of people are still feared trapped in the bus, which was buried by the debris, a police statement said.

More than 100 rescuers, including police and paramilitary personnel, have been deployed to clear the rubble using four earth removers.

Television images of the disaster showed boulders and rocks rolling down the hillside before crashing into vehicles on the highway.

So far, 14 people have been rescued, said Vivek Kumar Pandey, a spokesman for a paramilitary force involved in the search. They have been taken to hospitals but are not seriously injured, district administrator Abid Hussain Sadiq said.

Meanwhile, heavy rains have lashed another northern Indian state, Uttar Pradesh, with flooding disrupting the lives of more than 500,000 people.

Eleven of the state’s 75 districts have been hit by heavy rains, with Prayagraj receiving 102 mm (4 inches) of rain in the past 36 hours.

Heavy rain has caused several landslides in Himachal Pradesh state over the past few weeks. The region is 600 kilometers (375 miles) north of New Delhi.

Disasters caused by landslides and flooding are common in India during the June-September monsoon season.

In August, about 150 people were killed by landslides and flooding triggered by monsoon rains in western India’s Maharashtra state.