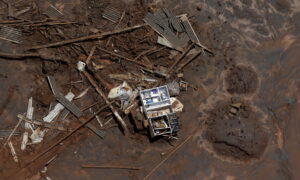 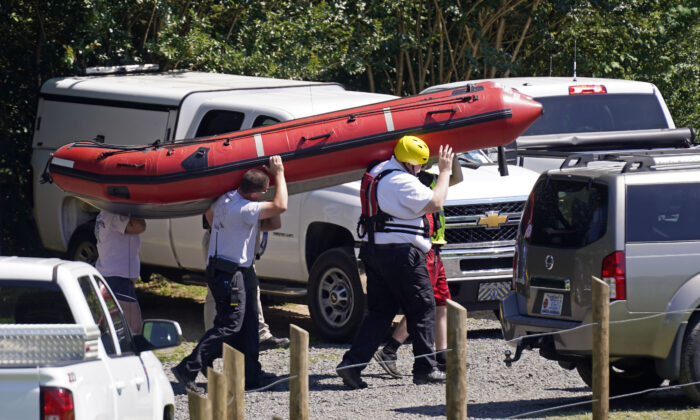 EDEN, N.C.—A search resumed Friday on a North Carolina river for two missing tubers after three others were found dead and four were pulled from the water, authorities said.

The group of nine people was floating down the Dan River on inflatable tubes and went over a dam that’s about 8 feet high next to a Duke Energy plant on Wednesday night, Rockingham County Emergency Services Director Rodney Cates told reporters. A Duke Energy employee who saw some of the tubers called the situation in to 911 Thursday afternoon, Cates said.

Cates said that an air and water search for the remaining two missing tubers went until dark Thursday and resumed Friday morning around 7 a.m. Rescue personnel were seen hauling rafts toward the water Friday at a staging area in Eden, north of Greensboro near the Virginia state line.

Cates did not release the identities of the people involved. Four were rescued and taken to a hospital for treatment of injuries that Cates said were not life-threatening after spending nearly 24 hours in the water.

Cates said it’s not immediately clear why the tubers didn’t contact authorities sooner, but he said it may have been because they didn’t have phones with them. First responders indicated the survivors were caught in fast-moving water near the dam when they were found, according to recordings of scanner traffic on broadcastify.com.

First responders can be heard over public safety radio ordering boats and other swift water rescue equipment to the area shortly after the 911 call came in Thursday around 3:15 p.m.

“We’re taking a call on the Dan River at the dam near the Duke Energy plant. Caller is advising five tubers … went over the dam,” one person says.

A rescuer says some of the tubers were stuck near the dam because of the pull of water flowing over it.

“They’re on that side … at the abutment for the dam. And they’re all caught in the pull. If you can come over … we can probably pull them out pretty good, hopefully,” the rescuer can be heard saying.

Cates told reporters Friday that debris and rocks in the river can puncture tubes or rafts, so it’s important for people to wear life preservers. He said it wasn’t clear if any of the nine were using life preservers.

“The current of the river makes it very hard to navigate, even for the most experienced swimmers. So we strongly encourage people to wear some type of personal floatation device in addition to the tube they’re in,” he said.

He said search efforts will continue throughout the day.

He said it’s not unusual for people to float the river on tubes or rafts in the area, but most get out and walk around the dam, which is marked by signs.

Duke Energy spokesman Jeff Brooks said the employee who spotted the tubers near the Dan River Combined Cycle Station and called 911 wasn’t available for an interview.