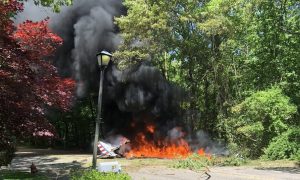 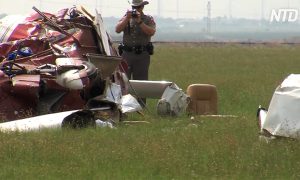 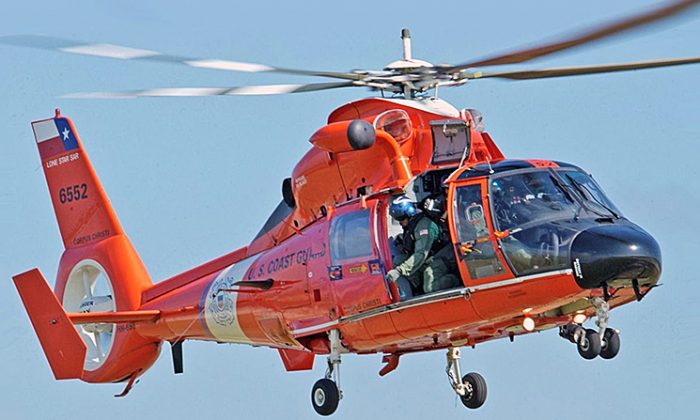 Several HH-65C Dolphin helicopters like this one participated in the rescue search. (PA2 Adam Eggers/U.S. Coast Guard)
Crime and Incidents

After 56 hours of fruitless searching, the Coast Guard has suspended the search for a father and son from New Jersey whose light plane crashed off the Florida coast.

New Jersey business executive Peter Renzulli, 51, and son Daniel, 18, were flying back from Disney World in Orlando, Florida. when their single-engine Piper PA-46 Malibu crashed into the Atlantic Ocean off the city of Jacksonville on Dec. 20.

The pair, both accomplished pilots, took off from Kissimmee Airport bound for Princeton, New Jersey. The plane climbed to a cruising altitude of 22,000 feet. After half an hour it plunged downward steeply, hitting the water off Ponte Vedra beach, about 18 miles south of Jacksonville.

#Update @USCG Air Station Savannah MH-65 Dolphin helicopter crew is conducting a first light search for the downed aircraft off the coast of #Jacksonville, Florida. The #USCG Cutter Ridley crew searched through the night and remain on scene. pic.twitter.com/zv6QhmYqnK

The Air Force Rescue Coordination Center received an aircraft distress signal around 9:45 a.m. on Dec. 20 and passed the message to Coast Guard 7th District personnel. The Coast Guard organized 21 separate sorties into the search area but turned up without a sign of the plane or its passengers.

The U.S. Navy, Customs and Border Protection, St. John’s Fire & Rescue, Jacksonville Fire & Rescue Department, and the Jacksonville Sheriff’s Office all contributed to the search, according to a Coast Guard press release.

“We always want the best case scenario to happen and will continue to monitor for new information that could aid responders.”

The family’s attorney, Justin A. Marchetta, released a statement saying, in part, “The family was devastated to learn that the aircraft could not be located. Peter and Daniel are accomplished pilots and their disappearance is heartbreaking.”

“We ask that the privacy of the Renzulli family be respected at this difficult time and we ask that those following this story keep the Renzullis in their thoughts and prayers.”

Marchetta mentioned that the older Renzulli had just completed 30 hours of advanced training in the Piper, The New York Post reported.

“The National Transportation Safety Board is conducting an investigation, but it may be several months before all of the facts surrounding this incident are known,” Marchetta concluded, according to My Central New Jersey.com.

Peter Renzulli was an accomplished money manager, who spent the past 17 years running financial management services. He was the president and chief financial officer of PerformAccount, and president at Bookkeepers 2 Go, LLC.

The elder Renzulli was a certified public accountant and an adjunct professor at Rutgers University, his alma mater. He held a bachelor of science in accounting and a master of business administration in marketing from the same school.

Daniel Renzulli graduated from Bridgewater-Raritan High School in 2018, and took classes at Michigan State University according to My Central New Jersey.com.

Renzulli is survived by his daughter, Meredith, and wife Lori.