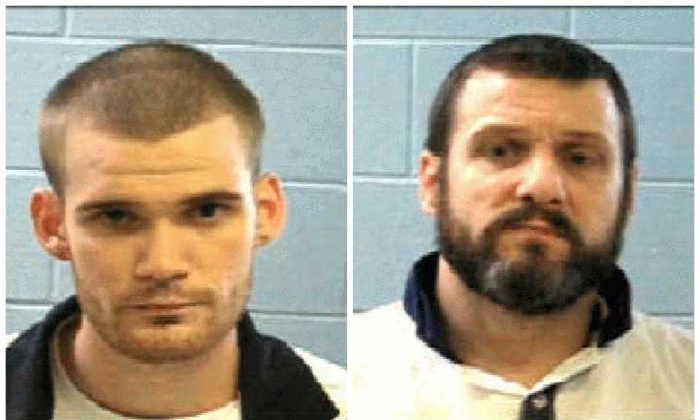 Sills, who called the prisoners “dangerous beyond description” after their Tuesday pre-dawn escape, told reporters on Wednesday afternoon that the fugitives were likely no longer in the area. “This is a very fluid nationwide investigation.”

Donnie Rowe, 43, and Ricky Dubose, 24, both serving time for armed robbery, escaped in rural Putnam County, about 70 miles southeast of Atlanta, as they were being transported with 31 other inmates.

The fugitives each have 9-millimeter guns they took off the prison officers they killed, said Sills, correcting information he gave on Tuesday about their likely weapons.

Ricky Myrick, assistant commissioner of the Georgia Department of Corrections, who appeared with Sills at a press conference, said the inmates were most recently cellmates at Baldwin State Prison and had been cellmates at other Georgia prisons.

“They have known each other for quite a while,” said Myrick.

A white 2008 Ford F-250 two-door pickup truck with a dent in the right quarter panel and tool boxes on both sides was stolen near the site of a Tuesday home break-in in Madison, Georgia.

The pair stole clothing from the house about 25 miles north of where they had escaped, and authorities found discarded prison clothing there on Tuesday.