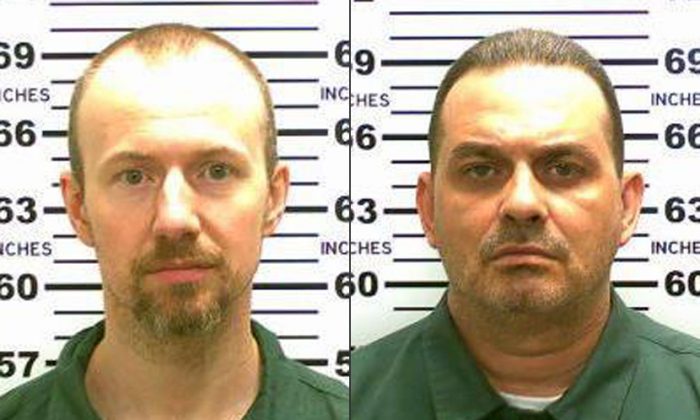 DANNEMORA, N.Y.—Investigators believe a prison employee had agreed to be the getaway driver in last weekend’s escape by two killers, but she never showed up, a person close to the investigation told The Associated Press on Thursday.

The person said that was one reason the manhunt was focused on the woods only a few miles from the maximum-security Clinton Correctional Facility. The person was not authorized to discuss the investigation and spoke on condition of anonymity.

David Sweat, 34, and Richard Matt, 48, used power tools to cut through steel and bricks and crawled through an underground steam pipe, emerging outside the 40-foot walls of the prison through a manhole, authorities said.

The person close to the investigation said authorities believe Joyce Mitchell — an instructor at the prison tailor shop, where the two convicts worked — had befriended the men and was supposed to pick them up Saturday morning, but didn’t.

On Wednesday, New York State Police Superintendent Joseph D’Amico said Mitchell was being questioned and “may have had some role in assisting” the convicts. He would not elaborate.

Mitchell has not been charged. Her son, Tobey Mitchell, told NBC on Wednesday that she checked herself into a hospital with chest pains Saturday. He said she would not have helped the inmates escape.

Meanwhile, authorities haven’t discovered any vehicles stolen in the area, suggesting that the inmates may not have gotten far.

In a renewed burst of activity near the prison, police using dogs and helicopters blocked off a main road Thursday and concentrated their sixth day of searching on a swampy area just a couple of miles from the institution, situated about 20 miles from the Canadian border.

Schools were closed, and residents were warned to lock their doors.

State Police said they holstered the force looking for the fugitives to 500 officers from 450 a day earlier. They said the latest search was based on a lead developed late Wednesday.

Authorities suspect the men also had help from the inside in obtaining the power tools. Guards and other staff members have been questioned by investigators, but no one has been disciplined or charged.