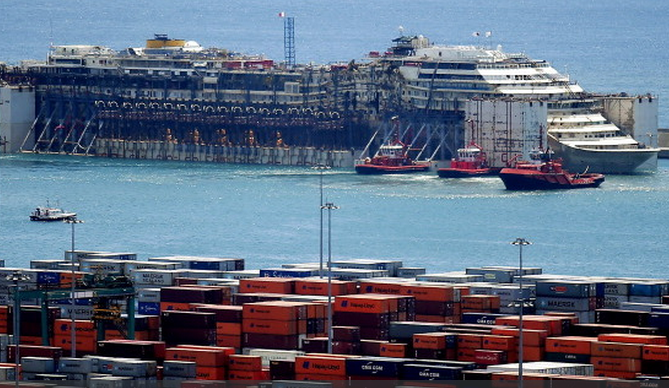 The wreck of the Costa Concordia on arrival in Genoa, on July 27, 2014. A search is continuing for the body of Russell Rebello, who worked as a waiter on the vessel. In a few days the dismantling of the wreck will begin. (Marco Bertorello / AFP / Getty Images)
Europe

ROME—Parked in the port of Genoa, the shipwreck of Costa Concordia prepares to disappear from sight and be lost in memory.  The wreck holds the shadow of the 2012 tragedy in front of the Giglio Island in Italy.  The search is ongoing to find the body of Russel Rebello, the Indian waiter who is among the 32 victims.  Meanwhile, the dismantlement of the former cruise ship will start in the next few days.

Both operations are being carried out in the Ligurian city near Genoa harbor office, coordinated by Admiral Vincenzo Melone. “There are fifty people at work [to find Rebello].  The organization has  been concentrated on the dock,” Melone said in an interview with the newspaper La Repubblica, “the work has certainly not stopped and continues on board.”

After the first discovery of human skeletal remains on the deck a few days ago – of which DNA results are still not available – research led to the discovery of other bones, but the origin might be from animals, researchers said in a statement.  The research is being conducted by the staff of the Fire Department and Coast Guard.

Russel’s brother, Kevin Rebello, arrived in Genoa at the beginning of the operations, because the search underwater at Giglio Island led to nothing. “All I want to do, is to take him to Mumbai,” he said in a report from the newspaper Secolo XIX , “the city where he was born and where our parents live.”

Kevin started a Facebook page in memory of his deceased brother. He said, “I’m waiting for the DNA test. But they assume (not confirmed yet) that it’s not my brother. I need more prayers and patience. They are continuing to do research. I am confident that the Italian researchers will do a good job. I’m sure they will do everything possible. I pray constantly for their safety and health. I can’t do more than that. We look forward to any news, and leave everything in the hands of God.”

The wreck – which is no longer formally owned by Costa Cruise – will be taken over by the consortium Saipem San Giorgio.  They will start the dismantling process soon. Hopefully the remains of the Indian waiter will be found before then, “for his family, but also for ourselves,”  Ansa reported Admiral Melone as saying.

“The project for the dismantling and recycling of the wreck is developed in four distinct phases, and is expected to run for 22 months,” Saipem said in a statement.

The first step, the safe arrival of the ship in the port, has already ended. The following step will be the dismantling of the bridge structures. The third phase will be the transfer of the skeleton of the former cruise ship to a proper basin dock.  Here the last step will be implemented:  cleaning and removing everything in all areas of the ship, and the demolition of all structures.  Finally, waste materials will be transported for possible recovery.  Around 200 people will be working on the project.

According to Saipem, around 80 % of the ship will be recycled.  This corresponds to the size of 3 football fields and is as high as a 14 storey building that could host almost 5,000 people. A report by the University of Milan estimates a positive impact on the Italian economy of approximately € 765 millions.