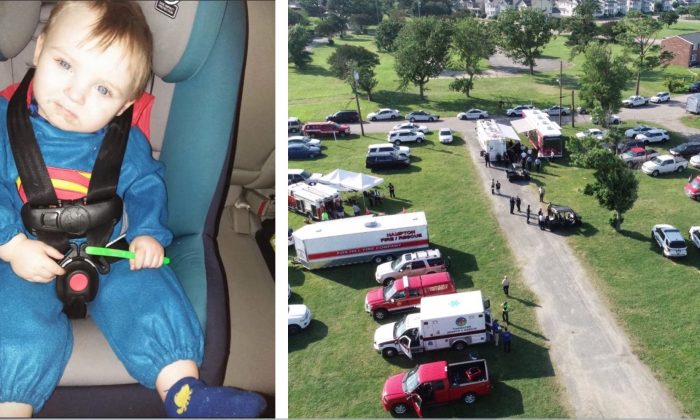 Police said they are searching for a missing Virginia 2-year-old who was put to bed inside his home on Sunday but on Monday morning was nowhere to be found.

Noah Tomlin was last seen around 1 a.m. Monday, June 24, in his mobile home in the Buckroe Beach area of Hampton, Virginia, according to Hampton Police Chief Terry Sult.

Sult told reporters at a press conference Monday that the boy’s mother reported him missing at 11:35 a.m. The police chief expressed appreciation to those offering to help look for the missing boy but urged civilian search parties to stay away.

Here is an update from Chief Sult on our efforts to locate the missing child in the Buckroe beach area. We appreciate citizens offering their assistance to search. However, we request that civilian search parties refrain from coming to the area. pic.twitter.com/hEWGHasBhe

Sult said police have so far been unable to find the boy despite engaging multiple search parties. He added that the Virginia Department of Emergency Management Search Team, the State Police, and the FBI have been called in to help in the investigation.

All available resources are being utilized to locate this missing child. If you have any information please come forward to police. pic.twitter.com/h2JG3aPMWg

“We’re turning over every stone,” Sult told reporters. “We’re going to do everything we can do to bring this child home safely.”

He added that no possibility was being ruled out, including foul play.

We continue our search this morning for 2-year-old Noah Tomlin. If anyone has any information please contact HPD at 757-727-6111 or 1-888-LOCK-U-UP to remain anonymous. pic.twitter.com/CRFscc5aPG

“This is weighing heavy on the officers’ hearts and minds that are searching and we are hoping for a positive resolution,” Hamilton Police Sgt. Reginald Williams said in a statement.

“This is weighing heavy on the officers hearts and minds that are searching and we are hoping for a positive resolution.” -Sgt. Williams on HPD’s continued search efforts for two-year-old Noah Tomlin. Please call HPD with any information that could assist police. pic.twitter.com/B4owq8VAQ6

The little boy was last seen wearing a white and green striped pajama shirt and a diaper.

“Unfortunately, since many children are never reported missing, there is no reliable way to determine the total number of children who are actually missing in the U.S.,” NCMEC added.