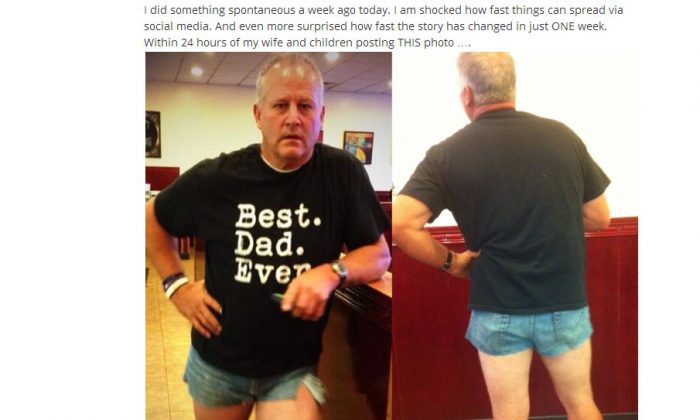 A screenshot of Scott Mackintosh’s blog shows his short shorts.
US

Scott Mackintosh, a Utah father, wore short shorts to prove a point to his teenage daughter about her choice in clothing.

“I heard my wife ask our daughter if she would please change into some longer shorts before leaving. She said ‘NO!’ Instead of turning her response and disrespectful attitude into a major battle, I decided to make a “small” statement on how her short-shorts maybe aren’t as “cute” as she thinks,” Mackintosh wrote on a blog.

Mackintosh then grabbed a pair of jeans and cut them into small Daisy Dukes shorts and took a photo of himself wearing a “Best. Dad. Ever” T-shirt.

He wore the shorts at a restaurant and mini-golf court, getting stares from onlookers. His daughter didn’t mind at first but when the family went into an ice cream shop, the daughter refused to go in.

Mackintosh elaborated on his move to the Deseret News: “I simply did this in hopes that my daughter would know of my great love for her and that she knows of her great worth. Now that it has gone viral, I hope that young women everywhere understand their great worth. I will look like an idiot any day if that point gets across.”

Mackintosh told KSL-TV that his daughter has “dressed a little bit better” since he donned the shorts.

“I’m a firm believer that the way we dress sends messages about us, and it influences the way we and others act,” he wrote on the blog.

Becky, his wife, was skeptical at first. “Are you kidding me?” she asked.

“I was embarrassed but I was hoping it would be a really good lesson,” she told ABC News. “People were snickering, pointing,” Mackintosh’s wife said about his shorts.