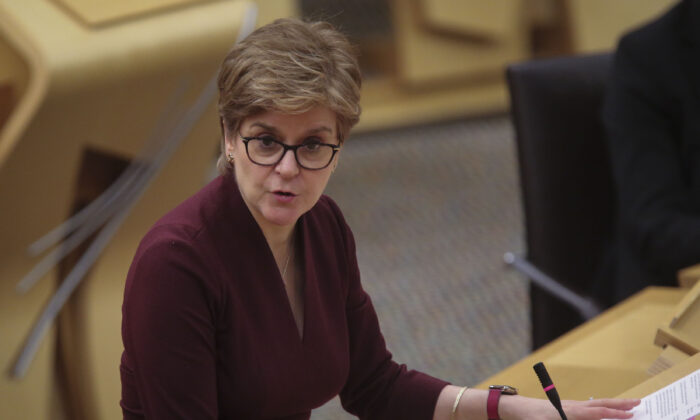 Scotland’s First Minister Nicola Sturgeon has announced that restrictions put in place to curb the spread of the Omicron COVID-19 variant will be lifted next week.

Addressing the Scottish Parliament on Jan. 18, Sturgeon said that recent data showing a fall in infections “gives us confidence that we have turned the corner on the Omicron wave.”

“A combination of booster vaccinations, the willingness of the public to adapt their behaviour to help stem transmission, and the temporary protective measures introduced in December, has helped blunt the impact of the Omicron wave,” she said.

Sturgeon said over the last week the number of people testing positive with a PCR test had fallen from “an average of almost 13,000 a day to just over 4,600”—a drop of 64 percent, with cases declining in all age groups.

She said she could “say with some confidence that the rise in cases driven by Omicron peaked in the first week of January and that we are now on the downward slope of this wave of cases.”

As a result, from Jan. 24, the government will lift a series of measures adopted last month to slow the spread of the virus, including limiting the number of people allowed to attend indoor events, restricting hospitality venues to table service only, and closing nightclubs.

Guidance limiting gatherings to a maximum of three households will also end on the same date, Sturgeon added, along with restrictions preventing adults from taking part in indoor contact sports.

Scotland’s controversial vaccine passport scheme for nightclubs and large venues will remain in place, but Sturgeon said it will not be expanded to other hospitality venues such as pubs and restaurants “at this stage.”

“Given that cases are now falling quite rapidly, and the current wave is receding, we decided that we will not at this stage extend the COVID certification scheme to other premises,” she said.

The announcement comes a day after the Scottish authorities lifted a cap on the number of people allowed at outdoor events.

But Sturgeon stressed there were “still some uncertainties ahead” and “throwing all caution to the wind would be a mistake.” As a result, she said it “makes sense” for remaining restrictions to be lifted on a phased basis.

The Scottish Conservatives said the government did not go far enough on relieving restrictions and called for an end to home working and the vaccine passport scheme.

The Scottish Labour Party urged the government to speed up support for businesses that have been affected by the CCP (Chinese Communist Party) virus measures, saying “too many businesses are teetering on the brink.”

More than 100 staff at two Glasgow theatres have not been paid in more than a month, said Scottish Labour leader Anas Sarwar.