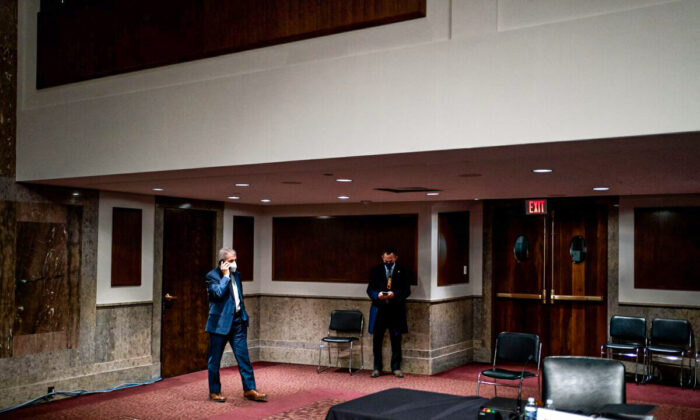 Four prominent scientists who played key roles in shaping the public narrative about the origins of COVID-19 received substantial increases in grant money from the institute headed by Dr. Anthony Fauci in the subsequent two years, a review of funding data by The Epoch Times has found.

Three of these scientists—Kristian Andersen, Robert Garry, and Michael Farzan—were advisers to a teleconference organized by Fauci held on Feb. 1, 2020, in response to increasing public questions about the origins of the virus.

The scientists also were instrumental in the publication of “The Proximal Origin of SARS-CoV-2,” a highly influential paper that promoted a natural origin theory for SARS-CoV-2, the virus that causes COVID-19, and has been frequently cited by the government and media.

Emails released under Freedom of Information Act requests show that the scientists told the senior members of Fauci’s teleconference that they were 60 to 80 percent sure that COVID-19 had come out of a lab.

Notably, despite their private concerns about the origins of the virus, the first draft of “Proximal Origin” was completed on the same day as the teleconference. Andersen and Garry were co-authors of the paper, and Farzan was acknowledged in the version published by the journal Nature for his participatory discussions in the article’s creation.

Additionally, Fauci’s National Institute of Allergy and Infectious Diseases (NIAID) provided a substantial increase in funding to EcoHealth’s Peter Daszak, through whom NIAID had funded controversial gain-of-function coronavirus research at the Wuhan Institute of Virology in China.

Some of this funding has continued through 2021—and one of the newest grants will continue through at least 2025.

A significant portion of the funding increase for Daszak, as well as for Andersen and Garry, was provided through NIAID’s creation of the Centers for Research in Emerging Infectious Diseases (CREID).

The program, which was originally referred to as Emerging Infectious Diseases Research Centers (EIDRCs) during the early planning stages in 2019, was formally announced under a new name on Aug. 27, 2020. It isn’t known why the program was initially delayed or why it was renamed.

The new initiative, described as a global network that involves “multidisciplinary investigations into how and where viruses and other pathogens emerge from wildlife and spillover to cause disease in people,” provided 11 new grants totaling $17 million of new funding in the first year and $82 million in total funding across five years.

Andersen and Garry were the co-recipients of a new $8.9 million, five-year grant made under the CREID initiative that established the West African Research Network for Infectious Diseases (WARN-ID). Daszak was the recipient of a new $7.5 million, five-year CREID grant that established the Emerging Infectious Diseases: South East Asia Research Collaboration Hub (EID-SEARCH). The other participants of the NIAID CREID program can be found here.

Notably, although the creation of CREID wasn’t publicly announced until Aug. 27, 2020, the award notice date for the grants to Andersen and Garry is listed as May 21, 2020. The CREID grant to Daszak lists a date of June 17, 2020. The timing of Daszak’s grant is particularly noteworthy, as it came shortly after President Donald Trump had revoked Daszak’s previous grant from Fauci’s NIAID in April 2020 because of Daszak’s entanglements with the Wuhan Institute of Virology.

Andersen, who had privately told Fauci on Jan. 31, 2020, that the virus “looked engineered,” but later helped spearhead Fauci’s efforts to promote a natural origin narrative, received a total of $7.4 million in funding in 2020 as compared to $4.5 million in grant proceeds in 2019. Andersen’s total grant funding increased to nearly $9 million in 2021. The new CREID grants (co-awarded with Garry) accounted for approximately $1.9 million of his 2020 grant proceeds and $2 million of his grant proceeds in 2021. Included in Andersen’s 2021 figure is a $266,250 CREID grant that was made to Andersen but didn’t include Garry as a co-recipient.

While it isn’t known currently whether there was a connection between the increased funding and the scientists’ involvement in shaping the public natural origin narrative, these revelations raise an obvious question: How is it that among the thousands of scientists eligible to participate in the much-desired funding from the 11 grants provided by Fauci’s new $82 million CREID initiative, three of those chosen happened to be the same individuals who had led the way in promoting Fauci’s natural origin narrative—despite their private concerns that the virus had been created in a lab.

During the Feb. 1, 2020, teleconference, Andersen claimed to be “60 to 70 percent sure the virus came from a laboratory,” while one of Andersen’s “Proximal Origin” co-authors, Edward Holmes, put that figure even higher, at “80 percent.”

Garry, who told the senior members of Fauci’s teleconference group that he “really can’t think of a plausible natural scenario where you get from the bat virus” to SARS-CoV-2, received $7 million in NIAID grants in 2020, compared to $5.7 million in 2019. Garry also received $6.6 million in grants in 2021. The new CREID grant (co-awarded with Andersen) accounted for about $1.9 million of his 2020 grant proceeds and $1.8 million of his grant proceeds in 2021.

During the Feb. 1, 2020, teleconference, Garry cited the remarkable sequences of mutations that would have to occur for SARS-CoV-2 to arise naturally, telling the group, “I just can’t figure out how this gets accomplished in nature.” However, Garry noted that a lab-created virus would easily explain the virus data he was seeing, telling Fauci’s group that “in the lab, it would be easy to generate the perfect 12 base insert that you wanted.”

Notably, Garry recently admitted in written correspondence with The Intercept that he had been advised not to discuss a lab leak in the “Proximal Origin” paper, stating, “The major feedback we got from the Feb 1 teleconference was: 1. Don’t try to write a paper at all—it’s unnecessary or 2. If you do write it, don’t mention a lab origin as that will just add fuel to the conspiracists.”

Garry—along with Andersen—must have heeded that directive, because on Feb. 1, 2020, the same day as Fauci’s teleconference, both men helped to complete the first draft of “Proximal Origin.” The paper, which sought to exclude the possibility of a laboratory leak, became the media’s and the public health establishment’s go-to evidence of a natural origin for the virus.

The choice of Andersen as a lead author for the paper is particularly curious, since Andersen had no material experience in researching coronaviruses. His stated focus was related to the Zika virus, Ebola virus, West Nile virus, and Lassa virus. It wasn’t until sometime after the Feb. 1 teleconference that he changed his biography to incorporate SARS-CoV-2.

Another recipient of funding under the CREID initiative was EcoHealth President Peter Daszak, who received a total of $1.5 million in both 2020 and 2021. Unlike either Andersen or Garry, proceeds from his CREID grant make up the entirety of his listed NIAID grants in both years. By way of comparison, Daszak had received approximately $662,000 in NIAID grant money in 2019. Put another way, Daszak’s post-pandemic funding increased by approximately 130 percent.

Daszak, who heavily promoted the natural origin narrative, was personally involved in gain-of-function work with the Wuhan Institute of Virology until at least April 2020. Most prominently, Daszak authored a 2018 research proposal that details the creation in a lab of a virus that bears a remarkable similarity to the defining features of COVID-19.

That proposal, dated March 27, 2018, details EcoHealth’s plans, in conjunction with the Wuhan Institute, to create entirely new coronaviruses through the synthetic combination of preexisting virus backbones. It describes how those viruses were going to be made more virulent in humans by the insertion of a furin cleavage site, a feature that distinguishes COVID-19 from all other SARS-related coronaviruses.

Another scientist who advised the Feb. 1, 2020, teleconference, Michael Farzan, received $9.9 million in grants that year from Fauci’s NIAID, followed by another $7.9 million in 2021 and an additional $919,000 at the start of 2022. By comparison, Farzan had received $3.8 million in grant money from NIAID in 2019. While Farzan received substantial increases in grant funding, none of that money appears to have come under grants provided by the CREID initiative.

Farzan, an immunologist who in 2005 discovered the receptor of the original severe acute respiratory syndrome (SARS) virus, had told the senior members of Fauci’s teleconference group in emails that the pandemic likely originated from a lab in which live coronaviruses were passed repeatedly through human-like tissue, accelerating virus mutations, with the end result being that one of the mutated viruses may have leaked from the lab. Farzan told Fauci’s group that he placed the likelihood of a leak from a Wuhan lab at 60 to 70 percent.

But in an Oct. 5, 2021, paper, Farzan appeared to agree with conclusions put forth in “Proximal Origin,” when he claimed that a “comparison of the S protein sequences indicates SARS-CoV-2 may have emerged from the recombination between bat and pangolin coronaviruses.” Farzan, like Andersen, works at the Scripps laboratory.

Both Farzan and Garry had noted the difficulties presented by the presence of a furin cleavage site in the COVID-19 virus during the conference call and through their notes from the call—which were submitted to Fauci, then-National Institutes of Health Director Francis Collins, and Wellcome Trust head Jeremy Farrar. The furin cleavage site is the defining feature that gives COVID-19 the ability to easily infect humans and has long been puzzled over by scientists, since no such site has ever been observed in naturally occurring SARS-related coronaviruses.

Although members of Fauci’s group later claimed that they gradually changed their views on the virus’s origins over the course of a month, on Feb 3, 2020, just two days after Garry and Farzan indicated their belief in a laboratory leak, Fauci attended a meeting at the National Academies of Sciences, Engineering, and Medicine. During this meeting, which included a presentation by Fauci and was also attended by Daszak and Andersen, Fauci and his group promoted the natural origin theory to the academy, despite having just been told on the teleconference and in subsequent emails that a lab leak provided the most likely explanation for the virus.

One scientist who doesn’t appear to have been a part of Fauci’s teleconference group but nevertheless saw a substantial increase in funding from Fauci’s NIAID is Scott Weaver, the scientific director of the Galveston National Laboratory, a facility established by NIAID in 2008. Since the start of the pandemic, Weaver has received at least $6.6 million in funding from NIAID, including approximately $1.7 million in CREID grants in 2020 and another $2 million in 2021. By way of comparison, Weaver received $1.35 million in grants from Fauci’s organization in 2019.

House Republicans have recently been focused on gaining disclosure and access to Fauci’s emails. It’s unclear at this point whether lawmakers are increasing scrutiny of NIAID’s funding and grant process.