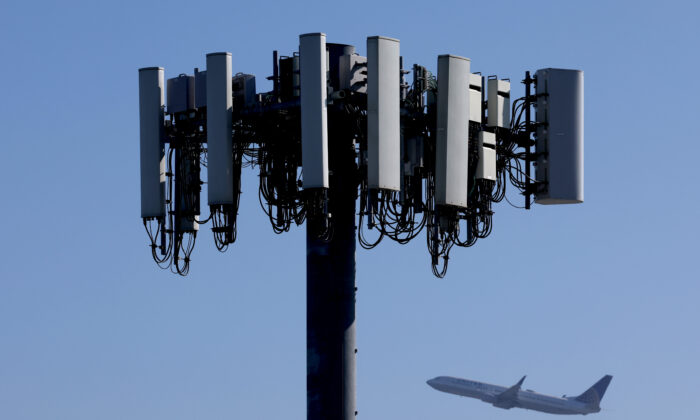 An airplane flies near a cellular tower as it takes off from San Francisco International Airport on Jan. 19, 2022. (Justin Sullivan/Getty Images)
Environment

Researchers have published a three-part, 150-page review of how wildlife could be harmed by the non-ionizing electromagnetic fields (EMF) produced by wireless infrastructure, raising questions about the environmental safety of the technology as 5G begins to blanket the United States.

“We’ve known for a while now, through a number of scientific studies, that cellular radiation is harmful to wildlife as well as people,” said epidemiologist Devra Davis.

Davis is the founder of Environmental Health Trust, an organization that has drawn attention to the possible risks of 5G, Wi-Fi, and similar infrastructure for human health as well as wildlife.

Environmental Health Trust didn’t produce the new review, which included researchers from the University of Washington and Johns Hopkins University. A spokesperson for the organization told The Epoch Times via email that it drew attention to the research in a recent filing with the FCC.

“We have more than enough research to trigger new regulatory action to protect wildlife. The FCC should have done a full review of the environmental impact of 5G network deployment before streamlining hundreds of thousands of 5G cell towers across the nation,” the spokesperson said.

FCC officials didn’t immediately respond to a request by The Epoch Times for comment.

In August 2021, the D.C. Court of Appeals ruled in favor of Environmental Health Trust in its petition against the FCC. The court found the FCC hadn’t done enough to address evidence linking radiofrequency radiation to negative health effects unrelated to cancer, even at levels below the FCC’s existing exposure limits.

The court also noted that the FCC didn’t adequately respond to the Department of the Interior when it raised the issue of environmental harms—specifically, the effects of EMF from communication towers on migratory birds.

In recent weeks, airlines warned that the nationwide rollout of 5G by AT&T and Verizon could interfere with planes, particularly the Boeing 777. The concerns prompted those wireless companies to hold off on launching 5G near airports.

Part one of the review examined how environmental EMF has radically increased in recent decades.

Part two looked at some of the many organisms affected by EMF, with the authors noting that “effects have been observed in mammals such as bats, cervids, cetaceans, and pinnipeds among others, and on birds, insects, amphibians, reptiles, microbes, and many species of flora.”

Part three focuses on EMF exposure limits, and the prospect for new regulation.

In recent years, discussion of the potential dangers of wireless radiation and, more specifically, 5G, has sometimes met with scorn from the corporate media. Citing online speculation that the COVID-19 epidemic was caused by the rollout of 5G, CNN titled a 2020 article “Why conspiracy theorists think 5G is bad for your health and why experts say not to worry.”

Asked about the possibility of industry pressure, a spokesperson for the Environmental Health Trust directed The Epoch Times to a 2021 review, “Lost opportunities for cancer prevention.”

“This eloquent review gives insight into missed opportunities for cancer prevention exemplified by asbestos, tobacco, certain pesticides and now RF radiation. The authors highlight how economic considerations were favored instead of cancer prevention. ‘A strategy to sow doubt on cancer risks was established decades ago and is now adopted and implemented in a more sophisticated way by the telecom industry regarding RF-EMF risks to human beings and the environment. Industry has the economic power, access to politicians and media, whereas concerned people are unheard,’” the spokesperson said.

Davis thinks the time to act on 5G is now.

“With 5G coming to neighborhoods across the country, the levels of wireless radiation will significantly increase,” Davis said. “We do not have the luxury of time to continue to debate this issue with the wireless industry. Adults, children, pets, wildlife, and our environment are all vulnerable.”

Representatives of the Wireless Industry Association (WIA), a major trade association for cell phone tower builders and wireless providers, didn’t immediately respond to a request by The Epoch Times for comment.

Meanwhile, a spokesperson for a 5G advocacy organization, 5G Americas, pointed The Epoch Times to its webpage, “5G and Health.” The webpage doesn’t appear to include any information about the dangers, or lack thereof, of 5G to wildlife.

When asked whether 5G Americas had any additional information or perspectives on 5G and wildlife, the spokesperson declined to comment further, stating that the “5G and Health” webpage included all the commentary the organization intended to provide.