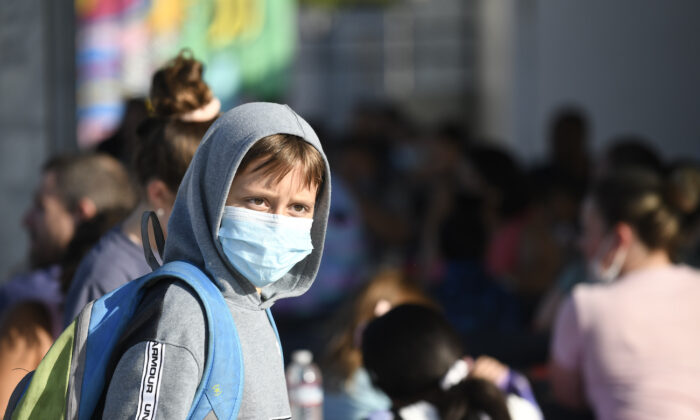 Should children be required to wear masks at school? A review of the costs and benefits, including some of the latest science, doesn’t add much to the case for mandating school masks.

First, let’s look at some basics.

The risk of death from COVID-19 among schoolchildren is very, very low.

A Nature study estimating the COVID-19 infection fatality rate (IFR), or the proportion of those who die from infection, found an IFR of just 0.001 percent in children aged 5 to 9, as well as an IFR well below 0.01 percent in all those aged 19 and younger.

The American Academy of Pediatrics (AAP), which has advocated for masking children aged 2 and older, found that only 460 children had died of COVID-19 between late May 2020 and Sept. 9, 2021, across 45 states, New York City, Guam, and Puerto Rico—0.08 percent of the total number of deaths they counted, regardless of age.

Looking again across multiple states, the AAP found that COVID-19 cases among children have surged in recent weeks, growing by 10 percent to 5,292,837 from 4,797,683 between Aug. 26 and Sept. 9—a trend that could be related to the start of in-person schooling.

Yet, the AAP’s own data show that children are just 0.9 percent of COVID-19 hospitalizations, a rate on par with previous weeks, and down from reported hospitalization rates of 3.8 percent in mid-2020.

With all that in mind, what are the benefits of masking children?

According to the AAP, those benefits include the “protection of unvaccinated students from COVID-19,” as well as “reduced transmission.”

Yet as described above, COVID-19’s risks for schoolchildren have been, and remain, extremely low.

What’s more, vaccines have been made widely available or, in some cases, are even mandated among teachers, who belong to age groups that are more vulnerable to COVID-19 than children.

And potential therapeutics are available. For instance, despite efforts to restrict access to ivermectin, individuals may still be able to obtain the drug, identified as an “essential medicine” by the World Health Organization.

Like the AAP, the Centers for Disease Control and Prevention (CDC) now recommends universal masking in schools, a change from its previous stance that vaccinated students and teachers don’t have to wear masks. Neither the AAP nor the CDC mention natural immunity in their school masking guidance.

They, too, point to transmission as a justification for universal indoor masking, citing the highly transmissible Delta variant.

Concerns about transmission come down to two questions: First, how much is widespread COVID-19 transmission driven by children in schools, and second, how well do masks and mask mandates limit transmission?

While some scientists have provided evidence that children might play a significant role in community spread, researchers generally agree that children, and especially young children, aren’t the primary drivers of it.

An observational study in the Journal of the American Medical Association suggested that children up to the age of 9 attending school weren’t major contributors to COVID-19 spread, although the study’s findings on teenagers were more equivocal.

A 2020 meta-analysis, or analysis of multiple studies, on COVID-19 susceptibility among young children and adolescents concluded that susceptibility was lower in those groups than in adults and offered “weak evidence” that they play a lesser role in population-level transmission.

More recently, a 2021 meta-analysis on COVID-19 transmission clusters concluded that children infected in school “are unlikely to spread SARS-CoV-2 [COVID-19] to their cohabiting family members.”

While the Delta variant appears to be more contagious, driving a rise in CCP (Chinese Communist Party) virus-related cases and deaths, many have argued that it’s less deadly than the original Alpha strain.

That would be in line with the hypothesized trade-off between transmission and virulence, which suggests that pathogens evolve in the direction of spreading farther while also becoming less damaging to their hosts.

The effectiveness of masks and mask mandates in schools is also a matter of dispute, with mask mandates for students apparently lacking clear support.

In his July 30 executive order against mask mandates in Florida schools, Gov. Ron DeSantis argued that “forcing students to wear masks lacks a well-grounded scientific justification,” citing a 2021 preprint that found no correlation between mask mandates and COVID-19 case rates among students and faculty across schools in Florida, New York, and Massachusetts.

Yet the authors of that study stressed that their research was limited to just three states, meaning that their conclusions may not apply elsewhere. They also emphasized that the masking variation that they identified in Florida schools could make their findings “even less generalizable to all U.S. students.”

A 2020 report by the CDC itself on elementary schools in Georgia noted that “COVID-19 incidence was 37 [percent] lower in schools that required teachers and staff members to use masks.”

Crucially, however, the CDC found that mask mandates for students didn’t have a statistically significant effect on COVID-19 incidence.

Here too, the study’s authors noted some limitations to their work; notably, their findings were based on self-reporting, and investigators didn’t directly examine whether people were using masks.

What About Masks More Generally?

An early randomized controlled trial of 4,862 adult participants from Denmark didn’t find that surgical masks reduced COVID-19 infection, although the authors noted that some results were “inconclusive.”

On Sept. 1, however, researchers released a working paper detailing a cluster-randomized trial of mask promotion across communities in rural Bangladesh, which involved 600 villages and more than 300,000 individuals, that appeared to support masking.

After surveying “all reachable participants” and testing blood from symptomatic individuals, the researchers linked mask promotion to a slight reduction in symptomatic COVID-19 infections.

Yet similar to the Danish study, the Bangladesh study was explicitly intended to examine mask-wearing among those “who appear to be 18 years or older”—not the young children or adolescents to whom school mask mandates apply.

What, then, are the potential costs of requiring children to be masked at school?

One obvious cost is cleanliness.

“We were almost all taught as children that disposable tissues are good because handkerchiefs are unhygienic and disgusting,” Michael Brendan Dougherty wrote in an article for National Review Online. “But for young children, toddlers in particular, the cotton-jersey masks that they most often wear in schools are just that, a handkerchief pulled over their mouth and nose constantly. They often are disgusting at the end of a day of use.”

Unsurprisingly, children’s masks may be a breeding ground for bacteria and other microorganisms, some being potentially dangerous.

One recent analysis from the University of Florida revealed that most masks worn by children in 90-degree Fahrenheit heat were contaminated with parasites, fungi, and bacteria, including a virus known to cause a fatal systemic disease in deer and cattle.

Masks, particularly disposable masks, are also harmful to the environment. With billions of single-use masks being thrown out every day, researchers believe that discarded masks and respirators are adding to plastic pollution—a problem to which school mask mandates can only contribute.

Masking and other interventions may also have knock-on effects related to the frequency of other respiratory diseases.

The recent, out-of-season spike in pediatric hospitalizations for the respiratory syncytial virus (RSV) has been tied to the COVID-19 response, with infants and young children who would have otherwise been exposed to RSV at an earlier age now falling ill from it.

Masking may also have significant psychological and developmental effects on children.

A 2004 article on masking in a pediatric hospital, authored long before the COVID-19 pandemic shifted the scientific debate on masking, expanded on some of the psychological hazards for children.

“Imagine the impact of a hospital filled with “faceless” people on a young child. Who is smiling? Who is frowning? How do I recognize my doctor? How does my nurse recognize me? Why is everyone so scared of me and my germs?

“When wearing masks, goggles, and/or face shields, non-verbal communication is impaired. Subtle facial cues are absent or can be misread and lip-reading is impossible.”

“I mean, how do you teach a child to read with a face mask on Zoom? I think children develop by watching other people,” Bhattacharya said.

The controversy over the developmental impact of masking children has even affected the AAP.

In August, internet users unearthed an AAP webpage emphasizing the developmental importance of face time between parents and babies that had apparently been removed from the organization’s website, along with other AAP webpages describing how babies and young children learn through looking at faces.

The AAP responded by stating that the web pages disappeared as a result of website migration, telling Just the News that “some content areas, including Early Brain and Child Development, are still being organized before they go live on the new platform.”

Finally, the practice of mandating masks could be argued to compromise individual and parental autonomy.

Advocacy groups such as Utah Parents United have spoken out against school mask mandates, saying that they undermine parental rights and are unnecessary for such a low-risk group, particularly given the availability of vaccines to adult teachers and staff.

With all that we know so far, how can we answer those parents?

If the benefits of mask mandates don’t outweigh the costs, it’s hard to find fault with opposition, or at least skepticism—especially for young schoolchildren, who are at the lowest risk of serious illness and death and who may be most vulnerable to the uncertain and understudied costs of universal masking and other stringent measures.