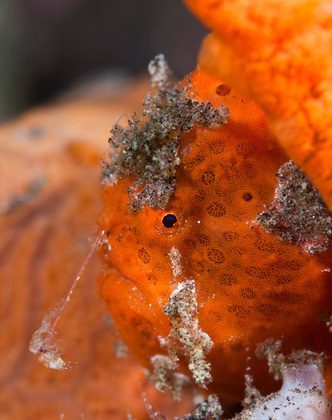 SCIENCE IN PICS: The Lure of the Painted Frogfish

The painted frogfish, Antennarius pictus, is also known as the painted anglerfish because it uses a lure to attract prey, like all frogfish.

In some species the lure resembles a small shrimp or fish, while in this species it looks more like a baited fishing line.

When the victim is close enough, the frogfish strikes out using the fastest recorded feeding action of any marine species, which can last as little as six milliseconds.

They can vary their color for camouflage, and juveniles may pass through a white phase.

Matthew Oldfield is a freelance photographer based in Bali, Indonesia, specializing in editorial and documentary images from both above and below the waves. He works primarily with charities, NGO’s, and other organizations working to conserve the environment, endangered species, and disappearing cultures.

Matthew is on Twitter @matthewoldfield. More of his photos can be found at matthew-oldfield-photography.com