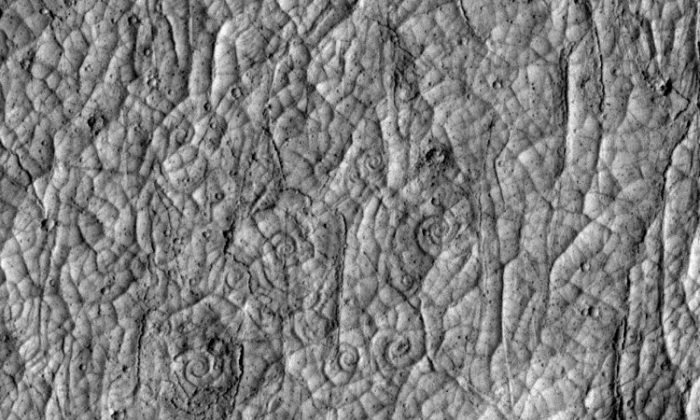 Lava coil on the surface of the 1974 Hawaiian pahoehoe lava flow. (Image courtesy of NASA/JPL/University of Arizona)
Science

Surface polygons and spiral coils in the Athabasca Valles prove this network of valleys near the Mars’ equator was forged by lava, according to a study published in Science on April 27.

Previously, scientists were divided on whether the valleys were formed by ice or fire as the polygonal patterns are suggestive of both.

“One evening, I was making a second pass over the HiRISE images when I first noticed puzzling spiral patterns in an image near the southern margin of Cerberus Palus,” said Ryan in a press release.

“[…] The coils become noticeable in the full-resolution HiRISE image only when you really zoom in.”

The images show 269 spiral coils, which are 5 to 30 meters (16.4 to 98.4 feet) in diameter, and cannot be attributed to shaping by ice. Rather, they are similar to lava coils seen in Hawaiian surface lava flows and submarine ones in the Pacific Ocean near the Galapagos Rift.

“The coils form on flows where there’s a shear stress—where flows move past each other at different speeds or in different directions,” Ryan explained. “Pieces of rubbery and plastic lava crust can either be peeled away and physically coiled up—or wrinkles in the lava’s thin crust can be twisted around.”

There is evidence of this stress from fracture and drift in the valleys’ crust, implying that the formation of a series of plates contributed to the area’s topography.

“Lava coils may be present in other Martian volcanic provinces or in outflow channels mantled by volcanic features,” Ryan concluded.

“I expect that we’ll find quite a few more in Elysium as the HiRISE image coverage grows over time.”