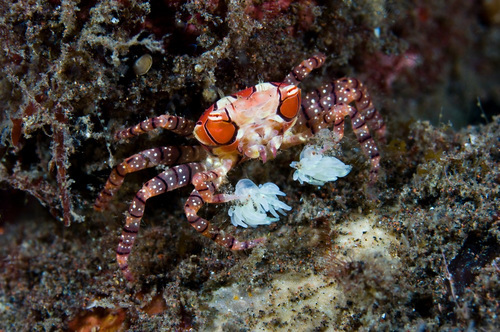 The boxer crab, Lybia sp., carries a pair of sea anemones on its pincers to ward off predators and fight duels with other crabs.

The crustacean has a symbiotic relationship with the cnidarians, wearing them like pom poms. It is known to use at least three different species of anemone, including Triactis producta and Bundeopsis sp., both of which have very powerful stings for their size.

However, these crabs are not completely dependent on the anemones, and can also use other organisms like sponges or corals.

Usually, boxer crabs make bluff punches with their main claws and then retreat. They feed with their second pair of legs, also used for walking, and rip off small pieces of food that are passed to the mouth.

The anemones can also aid feeding with the crab wiping them along the sea bed to collect food particles, which it then removes with its mouthparts.

Matthew Oldfield is a freelance photographer based in Bali, Indonesia, specializing in editorial and documentary images from both above and below the waves. He works primarily with charities, NGO’s, and other organizations working to conserve the environment, endangered species, and disappearing cultures.

Matthew is on Twitter @matthewophoto. More of his photos can be found at matthew-oldfield-photography.com