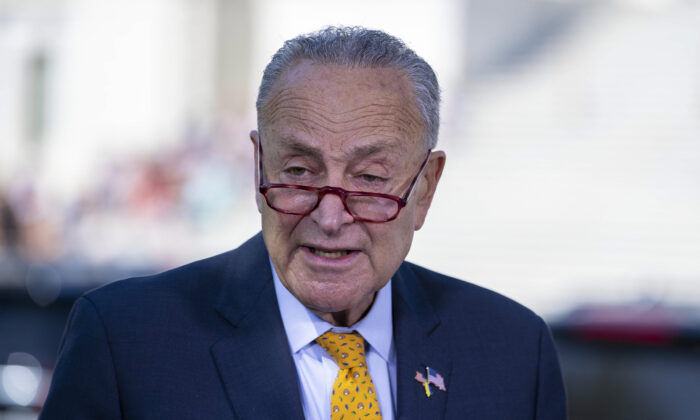 The Senate’s top Democrat is under pressure to retract his remarks promising Supreme Court Justice Brett Kavanaugh would “pay the price” after a man was arrested near Kavanaugh’s home with a gun.

Senate Majority Leader Chuck Schumer (D-N.Y.) said in March 2020 that Kavanaugh and Justice Neil Gorsuch, both Trump appointees, “have released the whirlwind and you will pay the price.”

“You won’t know what hit you if you go forward with these awful decisions,” Schumer added, speaking to a crowd outside the Supreme Court building in Washington.

After Nicholas John Roske of California was arrested near Kavanaugh’s home on June 8, with authorities saying Roske outlined plans to break into the home and murder the justice, some of Schumer’s colleagues called for him to speak up.

“That is the majority leader of the supposed foremost deliberative body,” Sen. Ben Sasse (R-Neb.) told the Washington Examiner. “I think that Chuck Schumer has an obligation to denounce this.”

Others pinned some of the responsibility on Schumer.

“That man was there, as he stated, apparently, to murder Justice Kavanaugh,” Sen. John Barrasso (R-Wyo.) said on Fox News. “And I believe Chuck Schumer bears some responsibility because he has contributed to this atmosphere of directly attacking members by name of the Supreme Court.”

In a social media statement, Sen. Chuck Grassley (R-Iowa) brought up Schumer’s past remarks and linked them to Roske’s arrest.

“Leaders must weigh their words more carefully esp[ecially] when they might incite violence,” Grassley said.

Schumer did not address the arrest of Roske on the Senate floor on Wednesday or Thursday, nor has he issued a statement about the threat.

A spokesperson for the New Yorker did not respond to a request for comment.

Schumer’s office pointed the Examiner to a statement Schumer made in 2020 in which he said, “I shouldn’t have used the words I did, but in no way was I making a threat.” He also accused Republicans of “manufacturing outrage.”

The comments at the time drew a rare response from Chief Justice John Roberts, a George W. Bush appointee.

“Justices know that criticism comes with the territory, but threatening statements of this sort from the highest levels of government are not only inappropriate, they are dangerous,” Roberts said in a statement. “All Members of the Court will continue to do their job, without fear or favor, from whatever quarter.”

Sen. Dick Durbin (D-Ill.), chairman of the Senate Judiciary Committee and the majority whip, noted Roske’s arrest while speaking on the floor Wednesday.

“We have to stand united—Democrats, Republicans, independents, left and right—and condemn violence wherever its source, right or left,” Durbin said.

According to court documents, Roske told officers after he was arrested that he was moved to act because of a Supreme Court draft decision that was published online that indicated the court is poised to strike down Roe v. Wade, which concluded there is a constitutional right to abortion. Kavanaugh reportedly signed onto the decision, a finalized version of which has not yet been released. Roske also suggested he feared Kavanaugh would rule against gun control efforts.

In a federal court in Maryland, Roske said that he was on medication. “I wouldn’t say I’m thinking clearly,” he said.