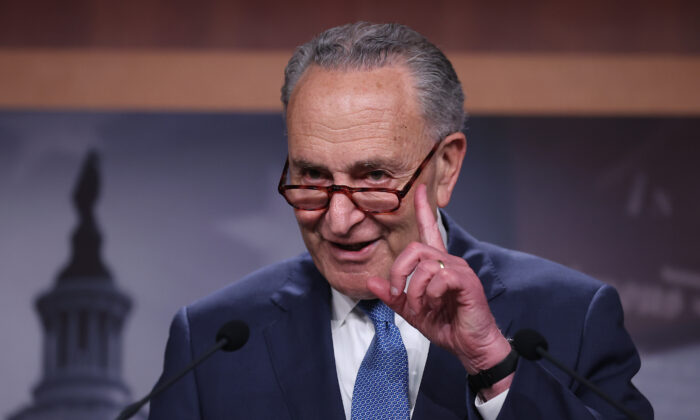 The Senate will vote next month on a bill that would dramatically change how elections are run, the body’s top Democrat said on May 28.

S.1, also known as the For the People Act, will be voted on during the last full week in June, Senate Majority Leader Chuck Schumer (D-N.Y.) told Democrat colleagues in a memorandum.

Schumer called the bill, which mirrors a version the House of Representatives passed in March, “legislation that is essential to defending our democracy, reducing the influence of dark money and powerful special interests, and stopping the wave of Republican voter suppression happening in states across the country.”

The act would federalize components of the election system, eliminating nearly all requirements such as photo identification. It would also require states to implement a system of automatic voter registration and to allow same-day registration on any day voting is allowed.

Critics have promised to bring a flood of lawsuits if it’s passed by the Senate and signed into law by President Joe Biden.

“In my state in Oklahoma, we have great voting engagement. We want to make it easy to vote and hard to cheat. S.1 takes away a state’s ability to hold people accountable for cheating,” Sen. James Lankford (R-Okla.) told colleagues on the Senate floor this month.

“The freedom to vote is fundamental to all of our freedoms. It is how Americans control their government and hold their elected officials accountable,” Sen. Amy Klobuchar (D-Minn.) told a Senate Rules Committee hearing on May 11.

Schumer told reporters on Capitol Hill that at two recent caucus lunches, “it was made clear how important S.1 is to the country, to our Democratic majority, and to individual senators, and those discussions are ongoing, and I have a lot of faith in them.”

The Senate is currently divided in half, with 50 Republicans and 50 Democrats or nominal independents who regularly vote with Democrats. Passing a bill requires 60 votes.

Schumer also plans to bring other pieces of legislation up for a vote when the Senate reconvenes on June 7, including the Paycheck Fairness Act, which would direct the Department of Labor to study pay disparities between men and women and make information on the disparities available to the public.

Schumer held open the possibility that the upper chamber will consider gun control legislation as well. He also said he may force another vote on the bill that would establish a commission to investigate the Jan. 6 Capitol incident. The Senate rejected the measure on May 28.