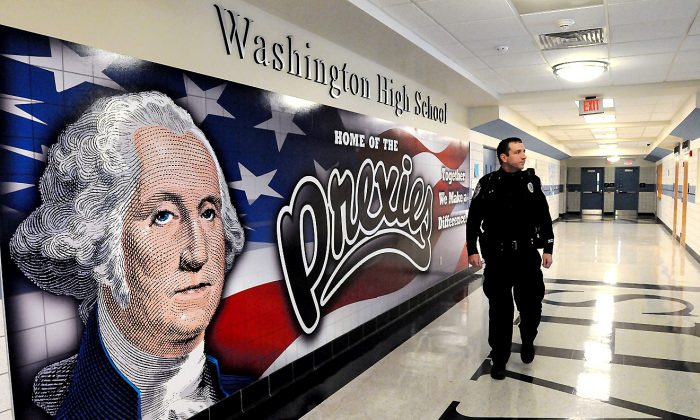 Washington police officer Todd Foreman—a Washington High School Resource officer—walks the hallways at school at part of his duties in Washington, Pa. Foreman, a city patrolman and detective who started at the district in 2004, says that forging relationships with students helps avoid or de-escalate potential problems. (Jim McNutt/Observer-Reporter via AP)
US

WASHINGTON, Pa.—Taking a short break from his many duties, Richard Horner recalled his days as a patrolman, when police officers were sometimes stationed at school entrances to sign in visitors.

Now a school officer, Horner rarely sits on the job. Instead, he is all over Trinity Area’s six schools. He has even gone to homes for wellness checks and to help parents get their kids out of bed and off to school.

As law enforcer, protector and instructor, Horner’s job encompasses not only maintaining a safe environment but also education and outreach.

“In my job, I do a little bit of everything,” said Horner, who retired from North Franklin Township Police Department in 2013 and became the district’s officer in February 2014.

Police departments have long had a presence in schools. In the wake of the Columbine High School shootings in 1999, that presence expanded. With the help of federal and state grants, districts began placing full-time officers in schools.

Safety continues to be the top priority, but the role of school officers has expanded to include education, conflict resolution, investigations and community outreach. Grants continue to diminish, but many districts are opting to foot the bill for their police officers.

“We call on him to do a variety of things,” said Trinity Superintendent Dr. Michael Lucas. “We value this position.”

“He develops relationships with the kids. Our kids are extremely receptive to that. He has a tremendous calming effect on everybody,” Snoke said. “The great thing about his position is that he’s proactive instead of just reactive.”

“I try to talk to someone before they get in trouble,” Horner said. “I like to put fires out before they start.”

“Through the years, the number of arrests at school have dropped dramatically. There’s more of an understanding of what’s expected from students,” Foreman said. “Getting to relate to the kids, showing empathy to students—I think that’s helped.”

In a county that’s mostly rural, being an officer in a city school is unique.

“There’s a greater risk for certain things, like violence. We have a large population on probation. Those types of things make it more difficult. Sometimes you arrest someone’s family and now there’s resentment. A lot of our kids here have been through things a lot of adults haven’t been through. It’s rough,” he said. “A lot of students see a person in uniform and show respect. There’s a small group that lacks respect for a police officer, but that’s very little.”

Foreman said being familiar to the students has helped with encounters outside of school. Students will talk to him when they won’t talk to anyone else about a problem.

“They understand we’re not here to get you in trouble, we’re here to help,” Foreman said.

Central Greene School District recently hired Officer Thomas Ankrom, who provides protection for the 1,900 students of the district. Spread out over three buildings, the district had not had a full-time police officer before this school year.

“In my career, I’ve had the opportunity to work with other (school resource officers). A lot of times, students will speak with the officer before me, the principal or another teacher. They feel more comfortable speaking with someone in uniform,” said Superintendent Brian Uplinger.

Ankrom uses an “unpredictable schedule” to monitor the schools.

“I get to know the kids,” said the retired state police officer. “When you get a rapport started young, they know they can trust me.”

While he also acts as an educator, Buchowski said his primary role is keeping everyone on campus safe.

The district, one of the first in the county to employ a full-time officer, enhanced its security last year, increasing the number of cameras and alarms and providing access cards to staff.

From his office, Buchowski can monitor the campus and lock and unlock doors.

Another way officers ensure safety is by reducing bullying and cyberbullying. The popularity of social media creates new challenges.

Snoke, who was a high school principal for 17 years, said that technology has reduced face-to-face quarrels and replaced them with anonymous insults.

“If used for positive things, (technology) is wonderful,” Snoke said. “But with texting and Facebook, anybody can put anything they want. Any tool can be used for inappropriate activities.”

Bullying in a virtual world also creates a question of when school districts can step in. Most districts don’t take disciplinary action against students for actions that take place off campus. However, they let students involved know they are aware of the situation, and if it carries over onto school grounds, there will be consequences.

Horner speaks with students and their parents about how to be safe communicating on the Internet.

“The kids trust (Horner) and will come to him,” Lucas said. “He counsels a lot of people.”