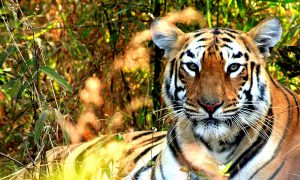 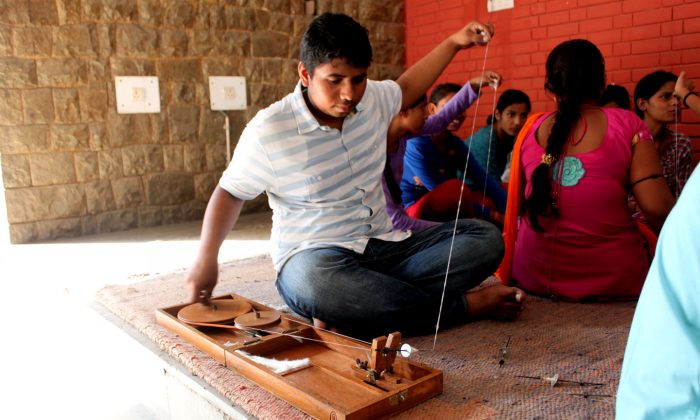 A student works on his charkha at the Gandhi Bhavan Center of Delhi University on Sept. 18, 2014. The course is helping to revive Gandhian value and teach Indian youth how to be self-reliant. (Venus Upadhayaya/Epoch Times)
India

NEW DELHI—Gandhi would be 145 years old on Oct. 2 if he were still alive, and proud his values are living on through the art of the spinning wheel he so popularized.

The charkha, a tool used to spin fiber into thread, became a major threat to the British economy, which relied on the Indian market, as masses boycotted British textiles and started to produce their own cloth.

The wheel became synonymous with the Gandhian values of truthfulness, non-violence, and self-reliance. It became such a part of Indian culture that it was once used on the earlier version of the Indian flag.

“We are responsible for not passing on Gandhian values to our youngsters,” said Dr. Nisha Bala Tyagi, deputy dean of academics at the Gandhi Bhavan Center of Delhi University. He says the vice chancellor of the school hopes the course will catch on and all universities will one day offer charkha spinning.

On a Wednesday afternoon, students are seated on the floor of the Gandhi Bhavan Center around 77-year-old professor Dr. Sita Bimbrahw.

“First you have to build character and that’s what charkha does,” said Bimbrahw, pointing at the students around her.

Bimbrahw says she worries about the increasing lack of values and despondency in India’s youth today, and uses her sessions to instill traditional values in her students.

“This thread is like a gentle person, if you behave harsh with it, it’ll break,” she says as she shows how to twist thread on a spindle from a mass of cotton.

More students trail in, and as they enter the class they greet Bimbrahw. “Namaste Didi,” meaning “greetings sister.”

She asks some more experienced students to teach some of the new students while she continues teaching the spindle.

“Do your work slowly. All work happens at a slow pace. We’ll get results without pursuit when we do our work best,” she says as she rotates the spindle.

One of her students, Parvinder Singh, is studying for an exam that chooses bureaucrats for Indian administration offices. Starting last year, the exam includes a section on ethics, integrity and aptitude. Singh believes charkha classes will help him better understand Indian ethics.

“How are we going to get a good society? Only if we have good moral character. Charkha is the simplest thing that teaches us to be good,” he said.

He said learning the charkha has given him other valuable life skills, besides learning how to make thread.

This is Bimbrahw’s second batch of students since the course started at the Gandhi Bhavan Center in February, and it is growing in popularity. The first class had only 22 students, and the second has more than 40, including two teachers from Delhi University.

Every Friday since 1969 Bimbrahw has been holding charkha classes at the Mahatma Gandhi memorial in New Delhi for anyone who wants to learn.

Bimbrahw is part of a small but dedicated group of Indians who hold on to Ghandi’s principles of self-reliance and simplicity, something she says brings inner peace.

“Everyone in the world is looking for peace,” she said. “When you work on the charkha and spin the thread, you get that peace.”