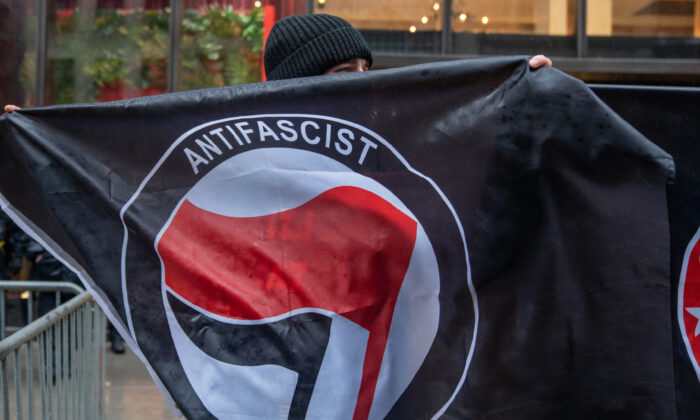 A school district in California has placed one of its teachers on paid leave following allegations made by journalism nonprofit Project Veritas that the teacher was involved in illegal political activity in the classroom.

In a statement on Wednesday, the Natomas Unified School District said the video revealed a teacher’s “educational approach that is disturbing and undermines the public’s trust.”

The district said, following almost two days of investigation guided by the principles of democracy and due process, it found that the teacher identified in the video had committed “clear violations” of Natomas Unified’s political action guidelines, “which are aligned with Board Policy and California Education Code.”

Yesterday, NUSD shared a statement with the community regarding a video of one of our teachers. Here’s an update on what we know and the district’s next steps. https://t.co/MClkWQZNuj

“[T]he teacher, using his own money, purchased a series of rubber stamps. These stamps include an inappropriate image of Josef Stalin with an insensitive phrase, as well as other stamps with Fidel Castro, Kim Jung Un, and others,” it stated. “The district’s investigation did discover that at least during the 13 days of this school year, he was using those stamps to mark student work as complete.”

The self-proclaimed “far-left” high school teacher, identified as Gabriel Gipe in Project Veritas’s video released on Tuesday, talked about how to move his students further left and turn them into “revolutionaries.”

“I have 180 days to turn them into revolutionaries,” the Inderkum High School teacher in Sacramento told an undercover Project Veritas journalist.

Gipe shared that his political views were “probably as far-left as you can go.”

“Like, why can’t we, you know, take up arms against the state?” Gipe told the journalist. “We have historical examples of that happening, and them getting crushed and being martyrs for a cause.”

The video showed that Gipe had an Antifa flag and a poster of Mao Zedong, a Chinese communist dictator, in his classroom.

When a student complained that they were uncomfortable about the flag, Gipe said the flag “is meant to make fascists feel uncomfortable.”

“So if you feel uncomfortable, I don’t really know what to tell you. Maybe you shouldn’t be aligning with the values that this is antithetical to,” Gipe said.

Read More
Making Sense of the Political Spectrum
Nazism, Fascism, and Socialism Are All Rooted in Communism
Antifa: The Network of Violent Revolutionaries Behind Much of Today’s Rioting

Gipe also told the journalist how he uses extra credit to motivate his students to actively participate in radical leftist events.

Gipe said he worked with PSL—apparently referring to the Party for Socialism and Liberation—and other groups, so he knew of all the events they had going on.

“I just put them on my whiteboard, let them know where they are. When they go, they take pictures. They write up a reflection. That’s their extra credit,” Gipe explained.

The district has since said that some of the events listed by the teacher “involved potential protests and other activities that, at times, became unsafe,” calling the teacher’s actions “unprofessional and irresponsible.”

Gipe also admitted on camera that he had a huge political spectrum on the wall in his classroom, and he put students’ photos on it based on their ideology quiz results.

“Every year, they get further and further left,” Gipe said.

Gipe said that there are more teachers like him in his school. Three teachers in his department are “on the same page.”

“The classroom is an extension of the community. Students in my classes will be taught with that simple fact always in mind,” reads Gipe’s page on the school’s website. “Increasing awareness about the issues that face our world, nation, state, and neighborhoods will drive our students to embrace that they are agents of positive change!”

The district said in its statement that it had since cleared “all posters and signage” from the walls of the teacher’s classroom.

It added that the Natomas Unified School District will soon “be taking the legally required next steps to place the teacher on unpaid leave and fire the teacher.”

“Students are the ones caught in the middle of this. To those who have felt uncomfortable at any time in the past 3 years, we apologize,” the statement read.

The Epoch Times has contacted Gipe and the school district for additional comment.