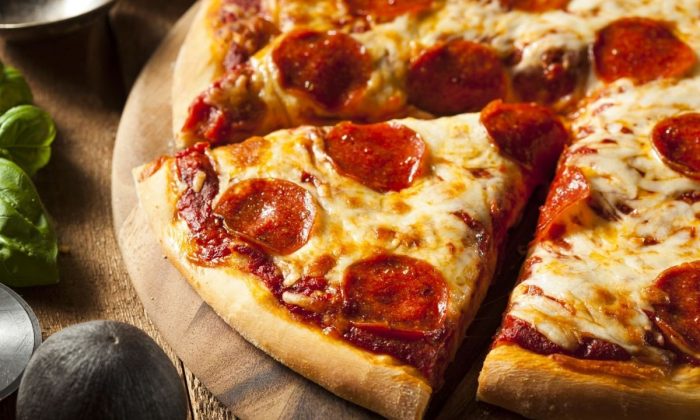 Stock image of a Pizza. (Shutterstock)
US News

A proposal to teach pleasure-based sex to kids as young as 11 and a middle school assignment using pizza as a metaphor for various sexual activities has drawn a windfall of ire from parents in two separate New England states.

“When you have adults talk to children about sexual pleasure, that is grooming behavior,” Solas said “one of the ways adults can groom children is by desensitizing them to sex. That compromises their natural radar for sexual predators.”

In Enfield, Connecticut, parents have expressed similar concerns about an assignment sent out to middle schoolers recently that describes various ingredients and toppings of a  pizza as sexual metaphors.

“We can use pizza as a metaphor for sex!” begins the assignment. “When you order pizza with your friends, everyone checks in about each other’s preferences, right?”

It goes on to say, “Now that you know the metaphor for sex, let’s explore your preferences! The assignment likens cheese to kissing and olive topping to oral sex as examples to help students complete the task of listing their own sexual metaphors based on pizza toppings and their ingredients.”

After complaints about the assignment from parents, School Superintendent Christopher Drezek issued a statement that the grade-eight health class assignment was sent out by mistake by the curriculum educator and not the teacher. He explained that a modified version of the pizza-as-a-sex metaphor assignment on sexual consent was the originally intended assignment

Brie Quartin, the district’s health and physical education coordinator, issued an apology to parents by email, stating that she had flagged the wrong version of the curriculum, but failed to post the right one. “I own that and apologize for the error.”

However, parents like Sophia Arel weren’t buying the explanation and flooded the signup for public comment session of the school’s board of education. The board cut off the parents after 75 minutes of testimony. Arel, who made a comment on the issue during a public discussion about mask mandates, called the claim “a cowardly and weak response.”

The Connecticut school is already under heavy fire by a  group of parents for other issues including mask mandates and white supremacy teachings.

What still remains a mystery in both the Rhode Island and Connecticut case is where the idea for both the legislative proposal and alleged wrongful assignment came from.

Rhode Island Democrat Rep. Recca Kislak, the bill’s main sponsor, did not respond to requests from The Epoch Times for that information nor did Drezek about the same inquiry about the Connecticut curriculum.

In a segment featured on PBS NewsHour,  Orenstein starts off by talking about teaching pleasure, saying “if we truly want young people to engage safely, ethically, and yes, pleasurably, it’s time to have frank, honest discussions about what happens after yes.”

Orenstein goes on to suggest that the “baseball metaphor” used to describe sexual encounters by boys be replaced with the more gender-neutral pizza metaphor and shows images of various pizzas and how each slice can be divided up into sexual preferences.

“It’s all about shared encounter in which everyone is equally invested in their fellow diner’s pleasure,” says Orenstein, “It works regardless of sexual orientation.”

Solas, a mother of a three-year-old and a six-year-old, is all too familiar with the backlash that comes with asking for something so fundamental as your own child’s school curriculum.

Her school district filed a lawsuit against her after she filed a request for a copy of the curriculum her kindergartener would be taught in class. The school argued in the suit that the release of the curriculum would put teachers at risk of harassment and, therefore, Solas should be barred from any further requests for it.

Solas, who is also a fellow with the Independent Women’s Forum, a DC-based conservative organization focused on public policy that affects women, responded with a motion to dismiss the lawsuit, arguing that what someone’s child is learning at school is basic public information every parent is entitled to.

While there is a large group of parents opposed to the Rhode Island legislation, Solas says given how liberal Rhode Island has become, she is concerned it will pass.

One major supporter is Rhode Island Sen. Tiara Mack (D) who serves as the youth organizing specialist at Planned Parenthood of Southern New England and is also a local YMCA board member.

Federal legislation has also been introduced that would provide public funding to schools that teach pleasure-based sex ed under the Real Education and Access for Healthy Youth Act (REAHYA).

Currently, sex education is mandatory in 29 states and the District of Columbia.