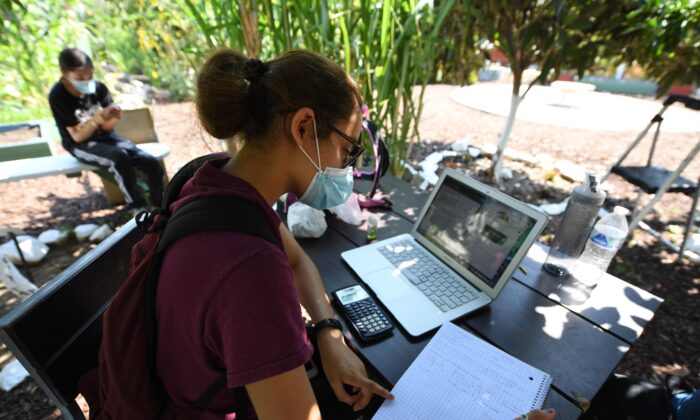 A college student follows a remote class in Los Angeles on Aug. 14, 2020. (ROBYN BECK/AFP via Getty Images)
US News

Hundreds of scholars, including some distinguished figures, have applied for positions at an online education startup that promises explicitly non-“woke” instruction in a number of academic disciplines.

Named “American Scholars,” the project was started several months ago by Matthew Pohl, former University of Pennsylvania admissions officer. As soon as word got out, résumés started to stream in from academics offering their participation, its leaders said.

Pohl described the project as the fruit of his gradual disillusionment with his career in the academic world, where he drove admissions at several prestigious universities. He noticed that with regard to education, most students weren’t getting their money’s worth, attributing that to the “administrative bloat” of establishment colleges, as well as the spread of quasi-Marxist ideologies that have come to be collectively known as “wokeness.”

He intends the project as an antidote to both. The interactive format of part-lecture, part-documentary video with quizzes and feedback sessions will aspire to demonstrate that quality learning can be furnished at a fraction of the cost of a modern-day college. Meanwhile, the content itself will be rooted in traditional American values, in sharp contrast to the ideologies currently dominating most universities that promote hostility toward such values.

“There is a massive and unrecognized demand for actual professors, business leaders, real thinkers whom regular people can associate with and learn from to better understand how they can live better lives through the Constitution and through conservative values,” Pohl told The Epoch Times, later adding that the guiding principles of the project could be more accurately described as “classical liberalism.”

“We actually expect a significant number of people who do not identify as conservative to join us—simply because they agree with our values,” he wrote in an email.

For the role of chief academic officer, who is responsible for the scholarly standards of the content, Pohl tapped Michael Rectenwald, a retired liberal studies professor at New York University.

Having given up his communist beliefs, Rectenwald left his job after he irked colleagues by criticizing the woke ideology. He went on to become an authority on corporate socialism, a convergence of government and business interest in establishing a novel form of totalitarian, socialist rule. He’s authored several books on the topic, including “Google Archipelago: The Digital Gulag and the Simulation of Freedom,” which warns against the rising power and ambitions of gigantic digital companies.

He’s already received applications from several hundred scholars, including some prominent names, from which he’ll be soon picking the first 10 instructors.

“We even have chairs of departments interested in working for us,” he said.

Rectenwald shared with The Epoch Times a sample of the applicants’ names under the condition that they won’t be released for now, as none of them have yet been selected for any of the positions. In addition, Rectenwald has his own list of “top-notch talent” he’ll ask to come on board.

“It’s going to be something where they’re able to deliver content in the way they want to, without the pressures that are being exerted on them in the university system to accommodate various ideologies like critical race theory and socialism and postmodernism and so forth,” he said, adding that such ideologies also will be taught, but from a critical standpoint.

The first offerings, planned to start in the fall, will focus on history, the Constitution, economics, and personal finance, he said.

The material will be suited for homeschoolers and college prep, as well as adult learning.

The project doesn’t seek to be accredited as an actual university, but rather to equip its alumni with the knowledge to “push back against some of the pernicious ideologies that are being purveyed in the system,” Rectenwald said.

“We’ve got to be frank. We’re in the midst of a major culture war.”

The content range, as well as the format of the platform, was selected based on a series of focus group polls of a total of about 1,000 families, Pohl said. Personal finance, for example, stood out as both an acute interest of the poll respondents as well as a blind spot of the current university system, where students often sign up for massive debt with little to no calculation of return on investment that would allow them to make such decisions adeptly, according to Pohl.

The development of the online platform is run by an expert who for now requires anonymity, due to his involvement with Big Tech, Pohl said.

So far, the project is self-funded with some offers coming in from investors, he said. He plans a subscription model starting at $19 a month and scaling up to about $39 a month for premium access.

American Scholars fits into a growing selection of education platforms that approach their material from a more traditional standpoint. The conservative Hillsdale College offers free courses on a variety of politically relevant subjects, while PragerU recently began offering an online education portal for K–12 students.