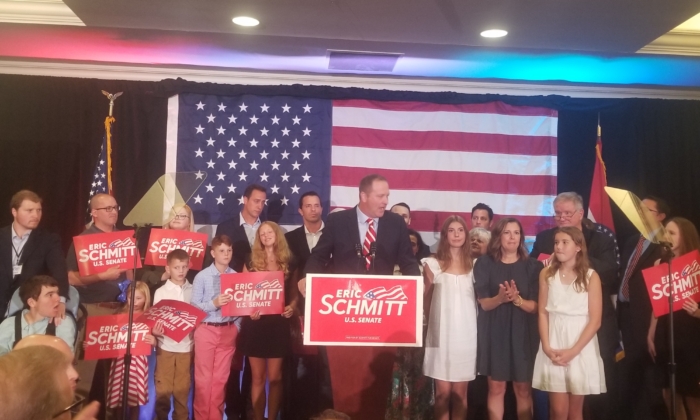 Polls closed in the race at 7 p.m. CST. Decision Desk HQ called the race for Schmitt roughly an hour later.

He’ll be facing the winner of the Democratic primary, Trudy Busch Valentine, in the general election on Nov. 8. Busch Valentine, an heiress to the Anheuser-Busch brewing fortune, was declared the victor soon after 10 p.m. CST.

The contest for the Republican nomination kicked off after incumbent Sen. Roy Blunt (R-Mo.) announced in 2021 that he wouldn’t be seeking reelection in 2022.

The race was shaken up by former President Donald Trump’s last-minute Aug. 1 endorsement, in which he pledged his support to “Eric.”

Two of the top contenders in the race are named Eric: Schmitt and former Missouri Gov. Eric Greitens.

Mark McCloskey, who was also running in the Senate primary, predicted to The Epoch Times in an Aug. 1 interview that a Trump non-endorsement of Greitens would “cut the legs out of the Greitens campaign.”

Yet others think the result would have been the same regardless of what Trump did or said, in light of recent polling that has shown stronger support for Schmitt.

Both Greitens and Schmitt raised millions of dollars in outside funding from billionaires in and outside of Missouri, including a flood of anti-Greitens spending in the past month.

Greitens had 16.9 percent of the vote as of shortly after 8 p.m. Hartzler was in second with 28.8 percent, and McCloskey had 3.1 percent.

Both Schmitt and Greitens accepted Trump’s endorsement, which he publicized on Truth Social as an endorsement for their respective campaigns.

Missouri AG @Eric_Schmitt has been a true warrior in the fight against critical race theory. He’s got what it takes to move public policy in the right direction. I hope my friends in Missouri send him to the Senate.

Schmitt has been attorney general in Missouri since 2019, after a stint as state treasurer.

Greitens served as governor of Missouri between 2017 and 2018, when he resigned while under investigation for ethical and sexual misconduct.