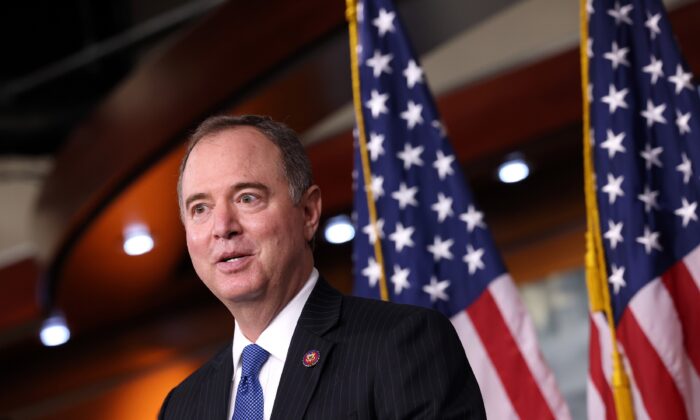 Rep. Adam Schiff (D-Calif.) is defending his promotion of the error-riddled dossier compiled by ex-British spy Christopher Steele after a grand jury indicted one of Steele’s key sources.

For the first time since the arrest of Russian analyst Igor Danchenko, Schiff was pressed on the dossier and his role in promoting it.

Morgan Ortagus, a former State Department spokeswoman who now co-hosts “The View,” noted that Schiff even read the dossier into the congressional record as chairman of the House Intelligence Committee.

“We know last week, the main source of the dossier was indicted by the FBI for lying about most of the key claims in that dossier,” she told Schiff, asking, “Do you have any reflections on your role in promoting this to the American people?”

Schiff said that anybody who lied to the FBI or Steele should be prosecuted and that they should not be pardoned if convicted, bringing up how former President Donald Trump pardoned Roger Stone and Michael Flynn.

“But at the beginning of the Russia investigation, I said that any allegations should be investigated. We couldn’t have known for example, people were lying to Christopher Steele, so it was proper to investigate them,” he said.

Special Counsel Robert Mueller found links between the Trump campaign and Russia operatives but no evidence of collusion. Mueller’s probe was repeatedly hyped by Schiff and other Democrats until it produced little of what they promised.

Schiff in 2017 said that he’d seen “more than circumstantial evidence” that the Trump campaign colluded with Russia, one of a series of statements hinting at concrete proof.

Ortagus said that Schiff helped spread disinformation by promoting the Steele dossier, which was funded by the campaign of Trump’s opponent, Democrat Hillary Clinton, and the Democratic National Committee.

“I think that’s what Republicans and what people who entrusted you as the Intel Committee chair are so confused about your culpability in all of this,” she said.

“I completely disagree with your premise. It’s one thing to say allegations should be investigated and they were. It’s another to say that we should have foreseen in advance that some people were lying to Christopher Steele, which is impossible, of course to do,” he said.

Schiff alleged that Trump engaged in “serious misconduct” and that none of what he did was “in any way diminished by the fact that people lied to Christopher Steele.”

He has engaged in similar defenses of his previous statements. For instance, after the Department of Justice’s inspector general revealed widespread abuse by the FBI of secretive spy warrants in surveilling Trump campaign associate Carter Page, Schiff said that “there was no way to know” that an FBI lawyer had fabricated information about Page. He has also defended a 2018 meeting he held with Glenn Simpson, a key Spygate player.

Schiff’s fresh defense of the dossier drew criticism from those involved in unearthing its origins, which were shielded from public view for some time.

“We’ve known all along that the Steele dossier was a fraud. All the key people that were pushing the dossier in the press, in Congress, and in the FBI knew it was a fraud. The Mueller team knew it was a fraud from the beginning—they turned a blind eye to it because it didn’t fit the narrative they wanted to construct, and their handling of it should be investigated,” Rep. Devin Nunes (R-Calif.) told The Epoch Times in an emailed statement.

Kash Patel, who as a top House Intelligence staffer was one of Nunes’ top investigators, added that Schiff for years “brazenly lied to the American people on a daily basis with false accusations that his political opponents ‘colluded’ with Russia.”

“Of all the circus animals who globbed on to the collusion hoax, Schiff was by far the most shameless,” he added.