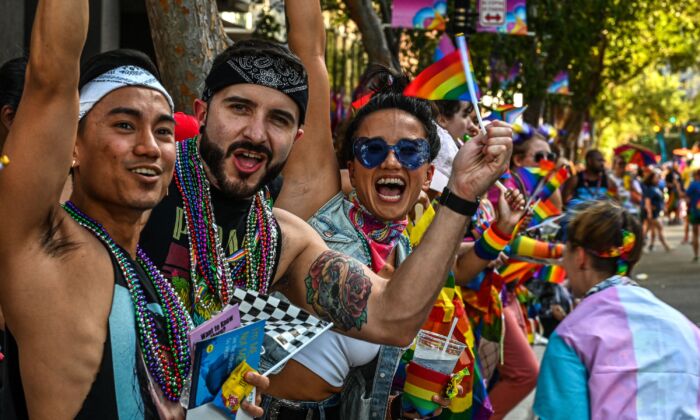 Teens don’t hear enough about gay sex and how to perform it, says a how-to manual promoted to students by teachers around the country and provided by the nation’s largest union of educators.

Teachers who want to share that message can encourage students to scan a QR code on a badge they wear. The $2 badges are sold to teachers by the LGBTQ+ Caucus of the National Education Association (NEA). The NEA represents more than three million public school “educators and allies” in more than 14,000 communities throughout the United States.

The front of the badge shows a column of horizontal stripes in myriad colors and the simple message, “I’m Here.”

The back displays a rainbow and the words “Safe Person. Safe Space. Scan to Learn More.” A QR code there sends interested students to an “LGBTQ+ Resource Toolkit” on the website of the LGBTQ+ Caucus.

On the landing page, viewed by The Epoch Times, a message reads, “Links/Resources/Referrals to other organizations does not constitute an endorsement by the NEA-LGBTQ+ Caucus.”

The site goes on to link to explicit instructional guides for teens, such as “Queering Sex Ed,” a publication by Planned Parenthood. The “recipe book” that is provided suggests teens should, after obtaining consent from a sexual partner or partners, consider experimenting with all kinds of sex, including binding each other with chains, inflicting pain with whips, and more.

“By wearing your badge, you tell everyone that you are a safe person with whom to discuss LGBTQ+ issues,” reads the teachers’ union website. “Affirming LGBTQ+ youth couldn’t be easier than by identifying yourself as a safe and supportive person.”

“There are some kinds of sex that we hear a lot about,” the Planned Parenthood publication’s introduction states. “Other kinds of sex, particularly kinds of sex that queer or trans* people might be interested in, don’t get a lot of coverage. This recipe book is designed to give you more information about some of the sex acts that we don’t think get enough play.”

The guide provides graphic step-by-step instructions on how to perform those acts, and offers links for purchasing needed supplies.

Parents in Hilliard County, Ohio complained to the community school board after learning about teachers wearing the badges in the classroom, according to a report by local news station ABC 6. The badges also appeared in New Jersey, Michigan, and on the West Coast.

Sex for Boys and Girls

It’s not the only graphic resource on Teen Health Source. The site offers a guide on inventive uses for fruits, vegetables, hairbrushes, and electric toothbrushes. It also instructs readers to dispose of items in an environmentally friendly way after use.

There is additional instruction for youngsters on “virtual sex” over the internet. It’s illegal for minors to send or receive nude pictures, the site notes. Then it offers a way around this obstacle.

“If you or your partner(s) are under 18, try to have a conversation about non-explicit things that turn you on. This can give you options for virtual sex that won’t get you in trouble with the law if you (sic) messages are discovered,” the site reads.

“If you feel like the risks are too high for you, it’s OK to wait until people are older, or only send sexy texts or non-nude images/videos,” the guide suggests.

In responding to parents’ backlash, Hilliard County school superintendent Dave Stewart has said the QR codes on the badges are meant for teachers only.

The code “is not there to be shared with students,” he said in an interview with ABC 6. “Rather, it is provided to adults by the NEA should they be interested in learning more about LGTBQ+ issues and supporting LGBTQ+ students. Any teacher who chose to wear one of the badges clearly understood that the resources at the link were intended for adults, not students.”

“By teens, for teens,” reads a banner at the top of Sex, Etc.’s website.

“Even though teens are taught that abstinence is a ‘100-percent effective’ method of preventing unplanned pregnancy and sexually transmitted diseases (STDs), abstinence can fail when teens try to practice it every day,” says an article written by a 16-year-old on the site.

In its condom listings, ScarletTeen’s website notes that “for people the age of many of our readers and users, snugger styles are more likely to fit best than larger or even average-sized condoms.”

“So, I’m 15 and I have been thinking about getting the bar (hormonal implant),” a post from a website user reads. “I don’t know if I’m too young or if it’s unreasonable for me to get it. Should I get the bar?”

The section of the NEA-LGBTQ+ Caucus website also links to guides on how to be “friends with benefits,” normalizes casual sex for teens, and gives advice on how to “organize like a sex worker.” It also provides information suggesting how teachers can present sex education materials without using words like “male” or “female,” which is not “inclusive,” the materials state.

A teacher who “refers to people who give birth, are pregnant, or have abortions as ‘mothers’ and/or ‘women’ is ‘exclusionary,'” one linked guide admonishes. Not using a transgender person’s preferred pronouns may be considered harassment under federal Title IX provisions, another warns.

“Failure to treat students consistent with their gender identity, including repeated failure to use the student’s correct pronouns, can be a form of harassment,” the document reads.

Other resources invite children as young as 13 to visit online and through in-person meet-ups with LGBT young adults up to 25. Still others from the Human Rights Campaign target children from kindergarten through third grade with pro-LGBT  “Why Say Gay” lesson plans and books. Advice to teachers includes using “inclusive phrases that are not gendered.”

The Human Rights campaign recommends books including “Born Ready: The True Story of a Boy Named Penelope,” “Call Me Tree/Llámame árbol: Exploring a Gender Free Book,” and “I Am Jazz: Transgender Topics in Elementary School.”

The Epoch Times contacted the NEA-LGBTQ+ Caucus and the NEA and requested comment, but received no reply.