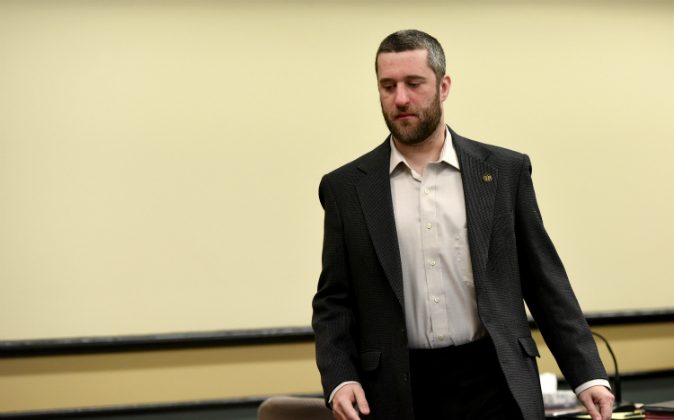 ‘Saved by the Bell’ Dustin Diamond Back In Jail

Actor Dustin Diamond is back behind bars after allegedly violating the terms of his parole.

Diamond, best known for his role as Screech on ‘Saved by the Bell,’ was arrested for possession of a switchblade and charged with reckless endangerment, carrying a concealed weapon, and disorderly conduct in 2014 in Ozaukee County, Wis.

The 39-year-old was convicted of two misdemeanors—carrying a concealed weapon and disorderly conduct—and sentenced to four months in jail on June 25, 2015. He spent 3 months before he was released in April on probation.

In an exclusive interview, published on May 16 in Extra, Diamond shared how a night on the town with fiancée Amanda Schutz at a local bar spiraled out of control, earning the ’90s sitcom star a stint in jail.

“One of the girl’s friends [Amanda] was talking to sucker-punched my fiancée… she leaned back to me and her face was covered in blood,” said Diamond to former Bayside High cast mate, Mario Lopez. When a male got involved grabbing Amanda by the hair, Dustin needed to protect her and ended up getting tackled by a male, “I opened my pocket knife and said, ‘Let my wife go immediately,’ which worked.”

He went on to explain further details of the night.

“I had my pocket knife like this… and the blade was right here and the guy [Casey Smett] came from around me and grabbed my throat, and so he nicked his arm on the tip of it—it was a Band-Aid, the most expensive Band-Aid I’ve ever bought,” Diamond told Extra.

Diamond paid more than $1,000 in restitution.

Though the actor was sprung from jail a month early, the experience was pretty telling.

“It’s pretty daunting, it’s pretty scary going into that environment. I found that as long as you follow the rules and stay with the system, it works. You can get in and out unscathed,” he said.

The details of how Diamond allegedly violated the terms of his parole is unknown.