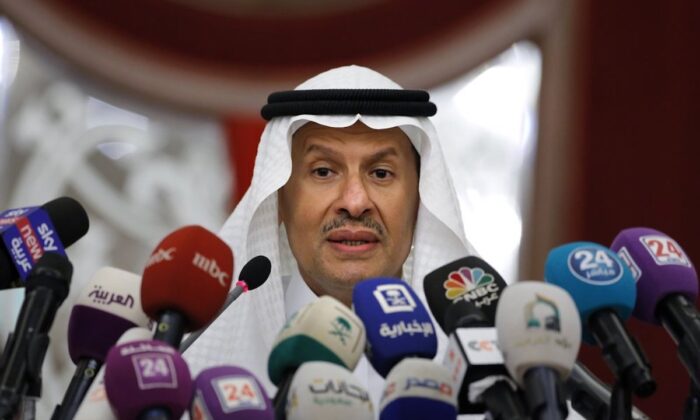 State oil giant Saudi Aramco said in a statement March 7 that it was cutting its official selling price (OSP) for April for all its crude grades to all destinations, amounting to unprecedented discounts of nearly 20 percent in key markets.

The move is an overt bid to wrest market share away from Moscow, Saudi officials told The Wall Street Journal, after talks between Russia and the Organization of the Petroleum Exporting Countries (OPEC) failed to agree on production cuts amid a coronavirus-driven collapse in oil demand.

Citing Saudi officials and OPEC delegates, the WSJ reported that besides the price cuts, the kingdom was also planning to boost output to some 10 million barrels per day, placing further downward pressure on prices. After OPEC and Russia failed to agree on supply cuts on March 6, oil prices plummeted roughly 10 percent in international markets, falling the most since the 2008 global financial crisis.

The U.S. oil patch has already been shedding thousands of jobs and suffering through a surge of bankruptcies, and lower prices will exacerbate those problems.

Meanwhile, all major markets in the Middle East plummeted March 8 as investors weighed the impacts of an all-out price war.

Markets “are finding it difficult to cope with all these variables that have been happening over the past 10 days,” said Mohammed Ali Yasin, chief strategy officer at Al Dhabi Capital Ltd., in remarks to Bloomberg. “That’s why we see this panic-selling across the board taking certain markets to lows not seen even during the financial crisis.”

The spread of the new coronavirus has sharply reduced air travel and thus the demand for fuel, while industry in China, the world’s second-largest economy, has been severely disrupted through shutdowns and travel restrictions.

To cope with falling oil demand, OPEC and its allies, a grouping known as OPEC+, earlier agreed on production cuts to buoy prices and were in negotiations to extend those cuts.

On March 5, the 14 OPEC countries agreed to cut output by 1.5 million barrels a day, or about 1.5 percent of world production. But the cartel couldn’t overcome Russian resistance.

Russia can tolerate low oil prices better than Saudi Arabia can and appears reluctant to slash output of its main revenue-making export.

While Saudi Arabia can produce oil cheaply, it needs $83.60 per barrel to balance its state budget, according to the International Monetary Fund, as it is almost exclusively dependent on oil revenue. Russia needs only $42.40 a barrel.

OPEC Secretary General Mohammed Barkindo of Nigeria said March 6 that the meeting had been adjourned in what he called a “painful decision.”

“At the end of the day, there was the general painful decision of the joint conference to adjourn the meeting,” Barkindo said. He said informal talks would continue because the situation was urgent.

“The numbers are clear: The demand destruction is real,” he added.