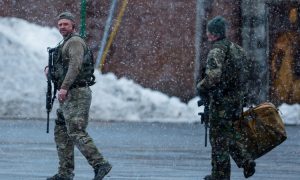 Eutelsat probably didn’t know what they were getting into when they decided to cut off the only independent source of uncensored television in China last June.

The company, admittedly hungry for lucrative contracts from China’s trade-rich communist regime, used a technical glitch to weasel out of broadcasting New Tang Dynasty TV (NTDTV), an international television network that has distinguished itself for its hard-hitting coverage of mainland China’s communist regime.

NTDTV broadcast news about the 2003 SARS pandemic that started in China weeks before the Chinese regime owned up to the health crisis.

It was also among the first media to reveal that poorly constructed schools were to blame for thousands of children’s deaths in the Sichuan earthquake last May and that the country’s seismologists, regarded as some of the most capable in the world, had accurately predicted the earthquake and warned officials about the pending disaster. Those warnings were suppressed to stop public panic.

NTDTV was the first television station to broadcast that Falun Gong practitioners imprisoned in China were being killed so their organs could be sold in highly profitable transplant deals.

The U.N. Committee against Torture recently called the regime to account on that practice in a Nov. 21 decision and asked authorities to investigate and punish the perpetrators.

For a regime known for its zealous efforts to control all media within its borders, having NTDTV beaming into people’s households from the skies above was a constant source of irritation.

Besides strictly monitoring and censoring all media produced in China, the regime is known for cutting pages and articles out of foreign-published books and newspapers distributed in China and rewriting history text books to glorify the Chinese Communist Party. A Reporters Without Borders spokesperson noted the result has been so successful, many young people now believe the 1989 Tiananmen Square Massacre is a Western myth. Even the Internet Chinese people view is monitored and filtered, thanks to technology provided by Western companies like Nortel, Cisco, Yahoo, Google, and others.

Eutelsat has been broadcasting NTDTV since 2004, but as the only independent television station broadcasting uncensored news into China, it has been the target of severe interference by the regime.

That interference resulted in Eutelsat refusing to renew NTDTV’s contract after airing the station for a year. Public pressure and international condemnation later moved the European satellite company to reverse that decision and again air the station.

But recently the company used an apparent technical malfunction with the satellite’s power supply as an excuse to drop the station again. That move has turned into a public relations nightmare for the company after Reporters Without Borders obtained a taped conversation of a well-placed Eutelsat employee admitting the move was a ruse.

The employee, thinking the undercover investigator he was talking with was actually an official at China’s Central Propaganda Department, admitted the station could still be aired, but they used technical reasons as an excuse to drop it in efforts to win business from the regime.

The employee said that efforts to do business with the State Administration of Radio, Film, and Television were met with only one sentence: “Turn it [NTDTV] off before we can talk.”

Now, almost six months later, Eutelsat is facing mounting pressure to get NTDTV back on the air.

The broadcaster’s independent programming has earned respect among politicians and rights leaders around the world. Since NTDTV’s broadcast was abruptly ended in June, Eutelsat’s decision has been condemned by human rights organizations, politicians, and journalistic organizations like Reporters Without Borders and the International Federation of Journalists.

But the station has also won admiration among politicians in the free world for its efforts to give Chinese people unfiltered information. The result: 240 members of the European Union’s parliament have signed a declaration demanding the station be put back on the air and the suspension explained.

“We believe it is because, as one of the parliament members said, what NTDTV is doing is the right thing,” said NTDTV spokesperson Carrie Hung.

“We’re doing it for the people of China, for the future of China, especially during this crucial period of time.”

Hung noted that besides manipulating Chinese people by controlling the information they could access, the Chinese communist regime was also directly responsible for tens of thousands of recent deaths and injuries related to SARS, the Sichuan earthquake, and the melamine-tainted milk scandal. In each case, the regime suppressed information vital for public safety.

“There is no freedom of the press in China, basically, the government wants to stay in control, to control the people and to legitimize their authority. They don’t care about the well-being and the lives of the people there.”

Hung was hopeful the groundswell of support would get NTDTV back on the air in China soon.

“We’ve all been granted with free access to information. But many of those people in China don’t have such an opportunity, so I think it is important for all of us to work together. Every voice counts, every single one of us can step and speak up and fight for the people in China.