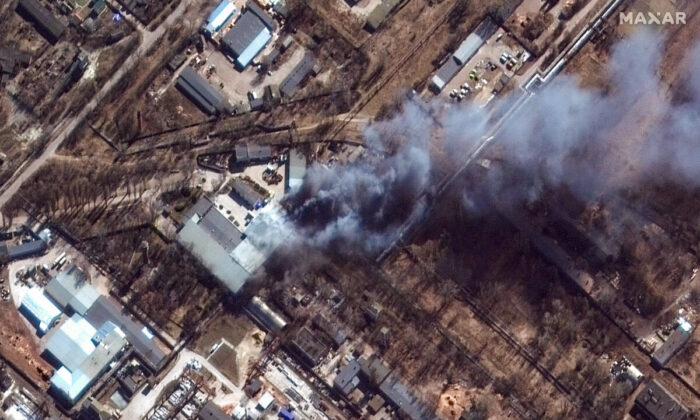 A closeup view of fires in an industrial area and nearby fields in southern Chernihiv, Ukraine, during the Russian invasion, on March 10, 2022. (Satellite image 2022 Maxar Technologies via AP)
Russia-Ukraine War

Satellite images taken on Thursday appear to show that the large Russian military convoy that had been slowly advancing towards the Ukraine capital city of Kyiv has dispersed and redeployed into nearby locations.

The convoy, which stretches for as much as 40 miles, was last seen northwest of Kyiv near Antonov airport.

On March 7,  U.S. Press Secretary John Kirby said the convoy remained stalled but noted that the Pentagon doesn’t have “perfect visibility” on the convoy.

However, satellite imagery from U.S. company Maxar Technologies showed the line of vehicles, tanks, and artillery has broken up and been redeployed, with armored units moving into positions in surrounding towns.

Some of the vehicles have moved into forests, Maxar reported, adding that images also show parts of the convoy further north have repositioned near the town of Lubyanka with towed artillery in firing position.

The convoy originated in Belarus and had been slowly advancing south toward Kyiv but last week it appeared to have stopped entirely amid reports of food and fuel shortages.

“It’s a very, very long convoy. We don’t even know if it’s all, we can’t even say that, that it’s all one convoy and not several. But it does remain as our best assessment as it remains stalled,” Kirby said during a press conference last week.

Kirby said the Pentagon believes the convoy was heading to Kyiv to “resupply.”

“When you look at the images from the air, you can see a lot of it but they don’t look like armored vehicles so much as they look like resupply trucks. That’s not to say that there aren’t combat vehicles in there,” he said. “We don’t have perfect visibility on it. But the assessment is that it was largely meant to help resupply and it is still stalled. It’s still stuck.”

U.S. officials previously said the large Russian convoy had been targeted by Ukrainian troops with anti-tank missiles, adding that they likely slowed down its progress and even stopped it in some places.

Kirby said the Russian military likely did not anticipate such problems or the extent of Ukrainian resistance.

But on Wednesday, the Institute for the Study of War said Russian forces “continued concentrating in the eastern, northwestern and western outskirts of Kyiv for an assault on the Ukrainian capital in the coming 24-96 hours.”

Meanwhile, Kyiv mayor Vitali Klitschko said that half of the city’s population has fled, and that the city has been “transformed into a fortress” while “every street, every building, every checkpoint has been fortified.”

The convoy’s re-deployment comes shortly after Mariupol Mayor Vadym Boichenko called for a no-fly zone to be implemented over Ukraine after a reported Russian airstrike devastated a maternity hospital, leaving 17 people injured during what was meant to be a temporary ceasefire in Mariupol.

In a video message posted to Telegram, Boichenko asked for the global community to “close the sky over Ukraine.”

“Today I am asking the global community for help. Close the sky over Ukraine. Our will has not been broken, we will fight to the end,” Boichenko said. “We have motivated soldiers and officers who defend our homeland. But today we need support.”

Russian President Vladimir Putin has issued a stark warning that he would view any country that declares a no-fly zone over Ukraine as a participant in the “armed conflict.”

Meanwhile, Dmitry Polyanskiy, Russia’s first deputy permanent representative to the United Nations, said reports that Russian forces had bombed the maternity hospital in Mariupol were “fake news” and accused Ukraine of having set up the hospital as a combat site.

On Thursday, the Russian Ministry of Defense claims that the hospital building, “due to its favorable tactical location close to the city center, was re-equipped into a stronghold of the Azov National Battalion,” an insurgent group with strong allegiance to neo-Nazi ideology that has been battling Russian forces or forces aligned with Russia. There were “two separate staged explosions near the hospital”—more specifically, “[a]n underground explosion and another of minor power, aimed at the hospital building,” the ministry claims.