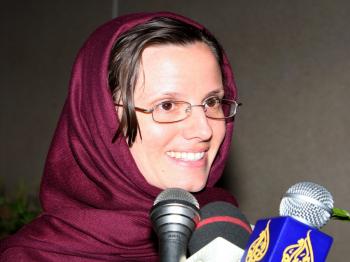 American hiker Sarah Shourd, who was released by Iran after more than 13 months in detention, speaks to the press upon her arrival at the Omani capital Muscat on September 14, 2010. (Mohammed Mahjoub/AFP/Getty Images)
Middle East

[ One of Three Americans Jailed in Iran Released on Bail ]

Sarah Shourd, one of three U.S. hikers detained in Iran 13 months ago on charges of espionage after crossing the Iraqi border into Iran illegally, was released on Tuesday.

Shourd was released on a $500,000 bail because of her medical condition, Iranian media reports. After her release she flew from Iran’s capital, Tehran, to Oman.

State Department spokesperson P.J. Crowley said at a press conference that “the United States did not pay anything for her release.”

“All Americans join with her courageous mother and family in celebrating her long-awaited return home,” President Barack Obama said in a statement on Tuesday.

The two other Americans remain in jail. Observers say the release indicates an ongoing power struggle between the Iranian president and the other hardliners within the government.

Shourd’s planned release faced criticism from some hardline members of Parliament who accused the government of “meddling in the judiciary’s affairs,” according to a report in the Tehran-e Emrouz daily on Sunday.