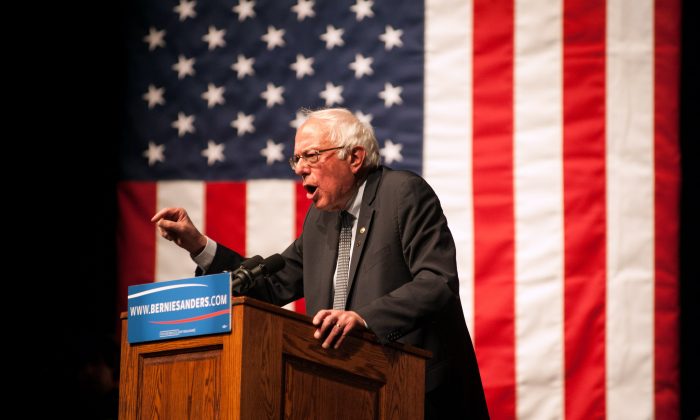 Democratic presidential candidate Sen. Bernie Sanders (D-VT) speaks during a rally on April 5, 2016 in Laramie, Wyoming. Sanders spoke to a large crowd on the University of Wyoming campus after winning the primary in Wisconsin. (Photo by Theo Stroomer/Getty Images)
2016 race

Feud continues between the Democratic contenders
By Steven Klett
Print

Bernie Sanders and Hillary Clinton continue to escalate their feud as the two campaigns move to the northeast for an emotional battle over New York.

The recent volley of attacks include Sanders doubling down on comments that Clinton is unqualified to be president, and that she’s “hustling money from the rich.”

After tepid attacks on Sanders, Clinton has gone on the defensive. Her press secretary, Brian Fallon, told MSNBC that the Sanders campaign “needs to take a timeout,” and Clinton expressed puzzlement at Sanders’ attacks saying that she would prefer Sanders to either of the leading Republicans.

I don’t know why he’s saying that, but I will take Bernie Sanders over Donald Trump or Ted Cruz anytime.
— Hillary Clinton

“I don’t know why he’s saying that, but I will take Bernie Sanders over Donald Trump or Ted Cruz anytime,” she said outside of Yankee Stadium in the Bronx.

The backlash to Sanders’s attacks were trending on social media with the hashtag, #HillarySoQualified.

It started with Clinton’s interview on MSNBC’s Morning Joe where she questioned Sanders’ knowledge of core issues in his campaign.

I don’t think you are qualified if you get $15 million from Wall Street through your super PAC.

Sanders responded by questioning Clinton’s qualifications to be president at a rally in Philadelphia.

“Well let me, let me just say in response to Secretary Clinton: I don’t believe that she is qualified if she is, if she is, through her super PAC, taking tens of millions of dollars in special interest funds,” he said. “I don’t think you are qualified if you get $15 million from Wall Street through your super PAC.”

Sanders responded, saying that Clinton should be the one apologizing.

The tension between the two campaigns follows a decisive win for Sanders in Wisconsin, and comes a little less than two weeks before the important New York primary on the 19th.